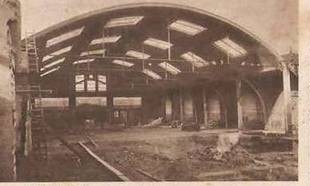 This cinema was originally built in 1912 as one of the first garages in Hilversum. In 1919 it was used by the Nederlandse Seintoestellenfabriek for the production of radio transmitters. After they left the buidling was reconstructed by architect A.R.B. Maas (Rotterdam) as a theater/cinema with 674 seats. In this form the building survived until 1972.

In that year the building was split into two cinemas and the facade was reconstructed. Later a third cinema was added in the former lobby. But the building was largely left unaltered and all later changes can be reversed. The original ceiling, stage, stagehouse, orchestra and stage lighting are still present. The original facade was hidden, but is still there. At this moment the building is threatened with demolition. It was closed by 2017.

Wow, I’m very curious, I need to go inside and check it out! I just remember it as an ugly Seventies building. Pictures of it’s current state can be seen here: View link

The building was closed in 2014, when a completely new “mega-cinema” complex was opened in Hilversum. Although at first the plans were to demolish the old Euro Cinema, it was discovered that this building still had its original facade and was worth saving.

here you can see the building in its original incarnation as a garage in 1912: http://www.gooieneemlander.nl/regionaal/gooivechtstreek/article27194296.ece/Euro-bioscoop-ontloopt-sloophamer_

here it is used by the NSF: http://www.terras.tv/pages/tvmuseum/tvmuseumnsf/nsf01.html

At this moment (July 20, 2015) the 1970’s facade is carefully being removed, and it is great to see that the old (somewhat damaged) facade is re-emerging! The city of Hilversum is making plans for the future of the building, but fortunately it will be saved!

Short documentary on the building with some nice images on youtube:

This theatre is closed, please change the designation to closed!