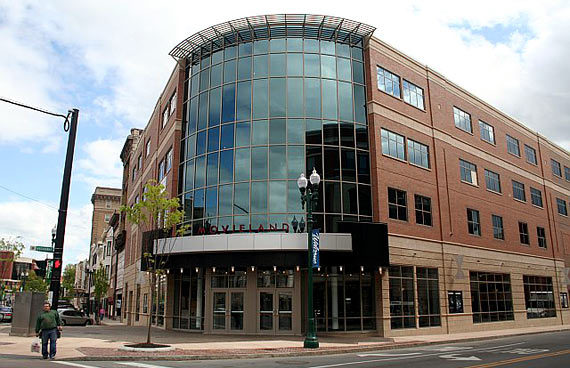 Bow-Tie Cinemas (formerly B.S. Moss Enterprises) opened their newest location on May 18, 2007. Located in downtown Schenectady, NY, just down the street from Proctor’s Theatre, Movieland 6 is a brand-new six screen facility that was the first new movie house built in Schenectady in over 70 years!

The theater features an expansive lobby with concession offering wine, beer, and a selection of hot foods, which can be enjoyed in the lobby cafe. Ticket holders walk down a corridor adjacent to the cafe which features two huge original photos of the Martin Theatre, Talladega, AL, and the Co-Ed Drive-In, in TX.

There are six deluxe stadium-seated auditoriums, the largest of which seats just under 300. All houses feature Dolby Digital Sound, and seating custom designed for Bow Tie Cinemas. There are two party rooms available for rental. The theater is part of the ongoing redevelopment of downtown Schenectady.

A nice theater, but nothing special. Right now it’s ok because it’s so new, Truthfully we can’t wait for the theater at the Colonie to open – Chris

this is a nice promo describing Movieland
http://www.youtube.com/watch?v=TlvLYaKhy_M

That is nice Fred,thanks for posting it.

first time i bought a couple pints of beer to enjoy with Juno but learned they needed to be consumed in the lobby….chugged them in about 2 minutes and felt good for the show