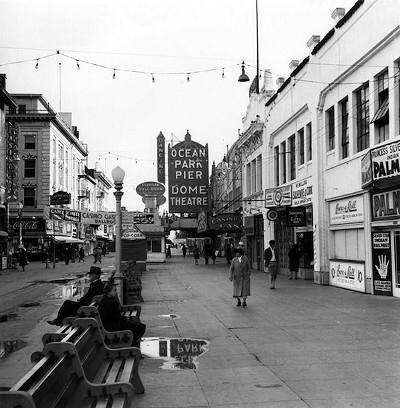 This theater was located on the boardwalk in front of Pacific Ocean Park pier. Opened on April 15, 1922, the Fox Dome Theatre seated 2,213 patrons. It was rebuilt and reopened on May 29, 1924.

In the remodel of POP pier, the Dome Theatre and the Rosemary Theatre were gutted. The fire, which destroyed the pier, also incinerated what was left of these old buildings.

The Fox Dome became the “Magic Carpet” ride at Pacific Ocean Park after the remodel.

There is a 1930’s photo of the Fox Dome auditorium during a Mickey Mouse Club meeting on the Mouse Heaven page at www.melbirnkrant.com

This link has a flyer for the Mickey Mouse Club meetings at the Fox Dome. The previous B&W photo in the other link is in dispute as to whether it is the Fox Dome or not.

DavidZornig: If you’re referring to this photo that kencmcintyre linked to, it was probably taken in 1922, the year Clara Kimball Young appeared in The Worldly Madonna, so it would depict the Dome Theatre that burned with the rest of the pier in 1924. But you’re right, the old theater would not have been called the Fox Dome, as the West Coast Theatres circuit was not taken over by Fox until a few years after the new Dome Theatre was built.

There’s a great 1950 moving picture scene of the Fox Dome in WOMAN ON THE RUN (1950), near the end. This is a great, newly restored copy of this once lost Ann Sheridan film noir. Playing at the Dome is THE BIG LIFT with Monty Clift and THE FORTUNES OF CAPTAIN BLOOD, with cartoon. Even the month seems clear: May. The Dome sparkles; so the does the film it’s in, darkly.

Just a note: This theatre was seen briefly in the 1951 remake of Fritz Lang’s classic, “M.” The killer is walking with a curly haired blonde girl about 45 minutes into the movie when the theatre comes into the frame.