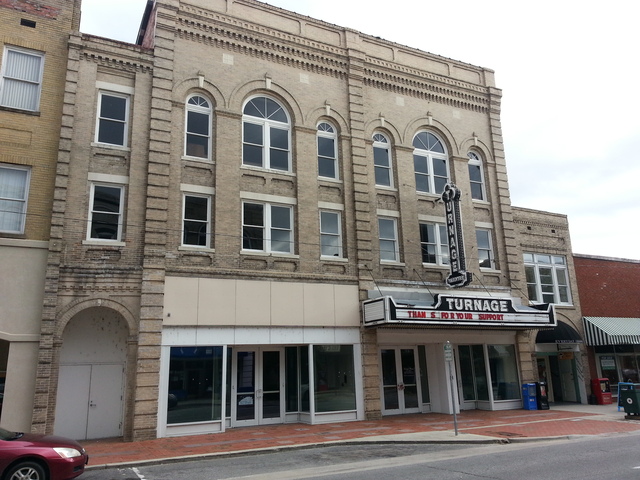 The historic Turnage Theater is actually two theaters. The original theater was an upstairs vaudeville theater built in 1913 and in its original condition. The Palace Theater was built to the rear of the original in 1930, and was fashioned after the Palace Theater in New York. Later renamed Turnage Theater after its owner C.A. Turnage, it showed movies until it closed in 1979, as commerce moved away from downtown areas all over the country. It sat vacant until the mid-1990’s, when a group interested in restoring Washington’s downtown to its original luster formed a committee to look into restoring the Turnage Theater.

With well over a million Dollars in private funds and matching amounts from USDA and five banks, a multi-million Dollar restoration occurred. The project was completed in 2007, and the Turnage Theater reopened for business in November 2007 as a performing arts center, and also screening movies. The auditorium seats around 465 and is as fine as any performing arts venue/theater around. When the economy soured beginning in 2008, a lack of tourism negatively impacted our waterfront community. The Turnage Theater only operated four years, closing its doors again on December 16, 2011.

The property is amazing. It is still like new and still has the old vaudeville theater above it. It has sate-of-the-art lighting and sound equipment, dressing rooms, restrooms, kitchen, balcony levels and orchestra pit. The building covers over 26,000 square feet.

This theater is in danger of closing as its city subsidy is running out: View link

This theatre was my first out of town emergency service call in the 60’s as I would later go into a lifetime career in projection & sound equipment.

On November 29,2011, it was announced that the Turnage Theater will be closing due to financial difficulties.

Following its show on December 16, 2011, the Turnage Theater officially closed.

The Turnage Theater is supposed to go on the auction block today; the City of Washington plans to bid on the theater.

According to WNCT-TV9 11PM news: Wells Fargo Bank has made the highest bid for the Turnage Theater. The City of Washington and any other bidders have ten days to come up with a higher bid. Should Wells Fargo prevail, the Turnage will most likely be gutted and turned into a branch office of the bank.

I have just listed the property for sale for Wells Fargo. The price is $750,000. Please contact me for more information. Tom Atkins………

According to WNCT-TV9 6PM News (Sep. 6, 2013): The Beaufort County Arts Council will be acquiring the Turnage Theater from Wells Fargo Bank. Plans are to reopen the Turnage in 2014.