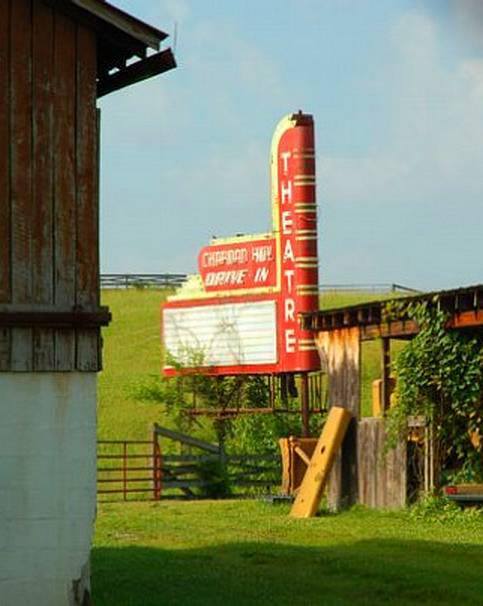 The Chapman Hi-Way Drive-In was located on Chapman Highway (Highway 441 South) in South Knoxville. It was close to the current intersection of Chapman Highway and John Sevier Highway, on the left as you were going out of town. It opened on October 18, 1951 with Betty Grable in “Wabash Avenue”.

When I lived in Knoxville in the 1970’s, the Chapman Hi-Way Drive-In was run by the Simpson chain. They ran almost exclusively “hard R” or “soft X” sexploitation movies: not really pornography, but drive-in sex movies, where the titles sometimes sounded “dirtier” than the actual movies. I know that for over a year, they showed the sexploitation classic “The Cheerleaders”, with revolving second features. I think it closed in the 1980’s, and a Wal-Mart is on the property now.

The Chapman Hi-Way Drive-In was at the time, and may still be, the only movie theatre, indoor or drive-in, in South Knoxville (south of the Tennessee River), unless there was an unknown older theatre in the South Knoxville, Island Home, or Vestal neighborhoods earlier.

the marquee sign still exists,restored, and can be seen if you take the old highway 61 from Blaine back towards knoxville.

The location of this theater is where the Super Wal-Mart now stands. The marquee was there until the late-1990’s – early 2000’s.

Approx. address for this drive-in was 7406 Chapman Highway.

Pity no one in KNOXVILLE took a picture….

Here is the marquee