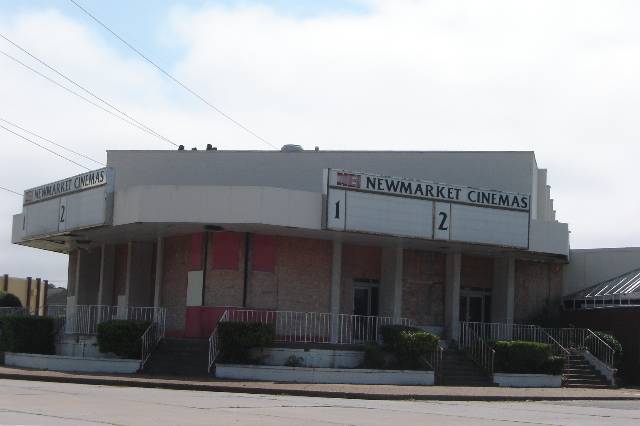 There are two buildings.

The original was built around the mid-1960s and has that steel and glass look. Under a brass plaque that is set into the walkway outside, there is a time capsule that has already long outlived the theatre. According to the plaque, it commemorates the opening of the theatre on September 13, 1965. It was then Newmarket Theatre but later became NEI Newmarket Cinemas 1 & 2.

The much newer Cinemas 3 & 4 building is a separate structure with two white oval shaped auditoriums joined by a central lobby.

Last I could recall going by there, the Cinemas 3 & 4 building were being used as a church. The original building was still unoccupied.

The round twin theaters did indeed open in the fall of 1974. I was there performing with the Hampton High School band at the big grand opening event. Each band member received free movie passes for the performance. The first films were MAME starring Lucille Ball (an inauspicious start) and an indie, the name of which escapes me. It did, however, feature Ted Cassidy (Lurch) who appeared in person, even though he arrived a little late. And, of course, some of my band mates tried to get him to say “You rang?” (he didn’t) but he was a good sport about it all.

what Stinker to open a theatre “MAME” by sunday we were playing to near empty house; 781 seat theatre.Gone Thursday.And an Indie you say.what kind of Stupid booker did they have,

Can anyone confirm if the original one screen Newmarket was equipped for 70mm? If memory serves it did play things like GONE WITH THE WIND and CAMELOT in this format as reserved seat attractions.

yes the Rockingchair’s projectors were equipped with 35/70 mm, and after the split in 1984, the projectors were still the same, Simplex I believe, but 70 was never used again.

In 1989 I saw Phantom of the Opera (Robert Englund) at one of the newer screens. I remember the oval shaped theater and the HUGE screen. I was very impressed with how big the movie looked.

I was a manager-trainee at the Newmarket Theatre under Dewanner Stallings (R. D. Stallings) in 1971-74. There was a deli a few doors up the sidewalk where I’d get us coffee. Most of the time I’d get there before he arrived and check the theater—then he’d come in and mention a lobby light was out or something I’d missed (darn it). I remember the three ushers: Randy Winfree, Robert Huth and David Price. We ran the movies “Billy Jack” and “Walking Tall” so many weeks that they were memorizing the lines. Mr. Stallings was a local advertising genius.

The Newmarket Theatre was a rocking chair, ultra-vision theatre. Back then you needed two projectors because the film was on reels that ran a max of 20 minutes, and you had to change between the projectors to keep the movie going.

Ultra-vision was a system where both projectors shot their picture into a central “box” instead of directly on the screen. The box contained mirrors and allowed the image to be projected from the center of the projection booth—this was meant to eliminate the slight out of focus problem you get when you have two projectors shooting at a slight off-center angle from the screen. I never thought it made significant difference.

The Newmarket also had an ongoing problem with the lights in the marquee. Every few months we had to have an electrician replace the ballasts…the odd things you remember.

Mr. Stallings used to say that the experience you got working for the theater was so valuable, you should pay the theatre to get to work there.

If any of you want to trade some stories, I can be found at http://www.mackarrington.com

Better quality grand opening ad in the photo section. Zoom in at