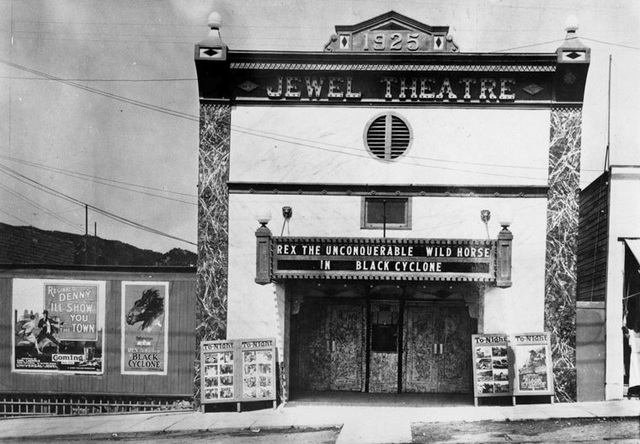 Built in 1925 this might have been the first movie theater in Tujunga. In 1926 it was listed in the Film Daily Yearbook as the Tujunga Theatre, with 280 seats. By 1929 it was listed as the Jewel Theatre with 300 seats.

This is an undated photo from the USC archive. If I had to guess, I would say it’s the same building as the photo above.
http://tinyurl.com/2o7tbh

Or vice versa? There wasn’t any date on the USC photo. The building next to the theater was persuading, I thought.

One of the posters in the USC photo is for “Half Breed”, a 1916 Douglas Fairbanks film.

Here’s the current link to the undated photo of the Tujunga Valley Theatre from the USC archives.

Comparing the nearby buildings in the third small photo from the bottom in the right panel on this page with other photos and the information from the L.A. County Assessor’s office, I think the address of this theatre was probably 9945 Commerce Avenue (called Sunset Boulevard at the time the theater was built.) Unfortunately, the Assessor’s office doesn’t have an original build date for the building on that lot now- only an effective build date of 1940. It’s possible that part of the Jewel Theater building was incorporated into the current building at that time.

Also, I think this house might have opened as the Tujunga Valley Theatre and then gotten the spiffy new facade and bigger marquee and the name change to Jewel Theatre a couple of years later. Note the brick building to the left of the theater in the 1925 Oviatt Library photo, as opposed to the shed-like building on that site in the undated USC photo. I think the building may be a bit older than whoever wrote the text for the Oviatt Library photo’s caption thinks it is.

This 1929 bird’s-eye view of Tujunga shows the south side of the Jewel, on the left side of the street, a few doors north of Foothill Boulevard (bottom of picture.) You can see the shadow of the marquee on the sidewalk, and a couple of small figures walking just beyond it.

The photo on the top of the page is of a different theater, the Rainbow/Tujunga on Foothill Boulevard. It’s an Armenian banquet hall nowadays. If you look at the angle of the street in the above photo, then click on one of the photos of the Jewel, you’ll see that they’re very different. (Commerce is a little steeper than Foothill in that part of town).

When I moved to Tujunga in 2002 the marquee was still there, awaiting demolition. Sad.