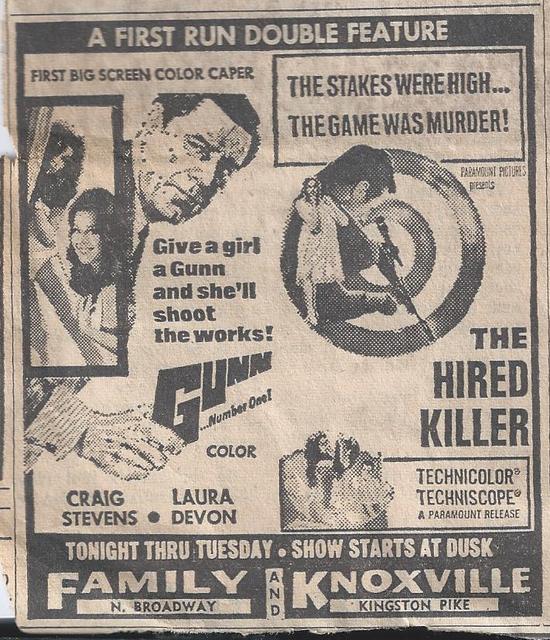 The Family Drive-In was located on North Broadway close to the intersection with Walker Boulevard and Dutch Valley Road. It was on the right just before you go into Fountain City, if you are headed north on Broadway. The back of the drive-in bordered on Walker Boulevard, and there was a shopping center located just north of it on Broadway.

The Family Drive-In was opened August 23, 1950 with Bill Williams in “Blue Grass of Kentucky” and closed on November 2, 1980 with “Don’t go in the Basement” & “Madhouse”. Like the Knoxville Drive-In, it was converted into an RV park for the 1982 Knoxville World’s Fair, and never reopened. In the 1970’s, it was run by ABC, and then Plitt. It held 600 cars, and was probably the second largest drive-in in Knoxville after the Twin Aire Drive-In.

This is where I saw “The Exorcist”. I think the shopping center next door has taken over the space where the drive-in used to be, as there was no sign left of the drive-in the last time I drove by.

this was my ‘make-out’ place in the early 70’s when I was in high school. By then it was showing 2nd rate b-movies like ‘The Velvet Vampire’ which was OK because we never watched the movie anyway.

The Family Drive-In opened August 23, 1950. I have posted the opening newspaper add in the photo section.

The last movies were shown on November 2, 1980. The last newspaper ad is posted in the photo section.

Opened with 2 colour cartoons(“Slap happy lion”, and “Clown of the jungle”) and “Blue grass of Kentucky”. Closed with “Don’t go in the basement” and “Mad house”.

Fotomac, The double feature playing on July 15, 1977 was “Outlaw Blues” and “Freebie and the Bean”