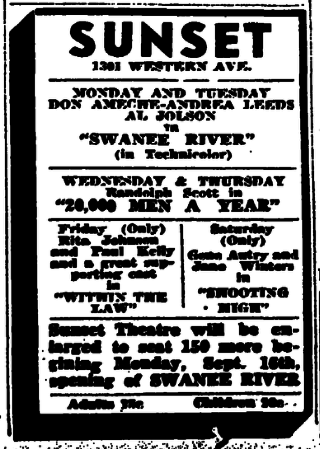 The Ritz Theatre is listed as being open between 1935 and 1955 although its not listed under the Ritz name until 1950 or just prior to that year. From May 29, 1951 until at least 1955 it operated as an African-American Theatre, named Booker T Theatre. Its location is just northwest of downtown Knoxville, on the borderline between the Fort Sanders and Mechanicsville neighborhoods.

The RTTZ THEATER was located at 1301 Western Avenue, at the corner of Deaderick. The RITZ was opened as a theater for African Americans in the same building that previously had been the SUNSET THEATER. To accomodate the area’s African American patrons, the balcony at the original SUNSET THEATER was designated for black patrons. After the SUNSET closed, the same black population later provided the clientele that resulted in the opening of the RITZ THEATER. THe RITZ was later renamed the SAVOY THEATER, then the name was again changed to the BOOKER T THEATER. By then, both movies and occasional live entertainment were being offered at the theater before it closed in the early 1950’s. During those years, the surrounding communities were known as Western Heights and McAnnally Flats—the entire section today having again assumed the original nineteenth century name, Mechanicsville. THe RITZ~SAVOY~BOOKER T theater was the only Africna American theater that ever existed in what today is known as the Mechanicsville community…"

In the June 24, 1939 issue of “Showman’s Trade Review” there is mention of a contract being let to build a new 600 seat theatre at 1301 Western Ave. The owners were Denton Theatres which Mr. George L. Denton was president.