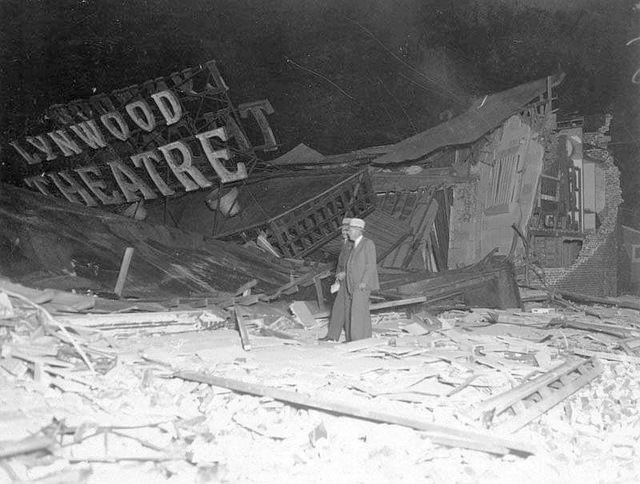 The Los Angeles Library has a photo in its database of the Lynwood Theatre, 11179 Long Beach Boulevard which was totally destroyed after the March 10, 1933 Long Beach earthquake (It has its own page on Cinema Treasures).

The Los Angeles Times was advertising the (new) Lynwood Theatre in January 1936 which was rebuilt from the ground up at a new location on Long Beach Boulevard, opening in September 1934. The Lynwood Theatre was still open in 1950, operated by the South-Lyn Theatres chain. It was converted into a bowling alley.

The L.A. Library’s California Index has three cards with headings containing the name Lynwood Theatre, but two are contradictory.

The earliest cites Southwest Builder & Contractor issue of August 1, 1924, which said that the contract had been awarded to build the theatre at the corner of Long Beach Avenue and Elizabeth Street.

The second, citing Southwest Builder & Contractor issue of January 16, 1925, said that bids were being taken for the theatre, but the location is given as the southwest corner of Long Beach Boulevard and Elmwood Avenue.

Unless the library made an error on one or the other of the cards, or Southwest Builder made an error in one or another of its articles, it looks as though the original project fell through and construction was delayed a year and the site changed. This is too bad because there’s also this card in the index which, though it doesn’t specifically name the Lynwood Theatre, is timed perfectly to refer to it, citing Southwest Builder of May 9, 1924 as saying that a theatre in Lynwood had been designed by architect Werner Ernest Noffke. Since the project was apparently moved I suppose we can’t assume that the same architect was used for the theatre that actually got built.

The third card actually naming the Lynwood Theatre cites California Graphic, issue of August 22, 1925, reporting on the gala opening of the theatre on August 14, 1925.

There is also a card which refers to the replacement theatre built after the earthquake. This card cites two issues of Southwest Builder & Contractor; September 28, 1934, and December 14, 1924. Both announce the plans of the Lynwood Theatre Corporation to erect a new theatre designed by Paul Kerr. The address is given as 11600 Long Beach Boulevard. This is a few blocks south of Elmwood Avenue (assuming that Elmwood is now Imperial), so it might be that the two Lynwood Theaters were in different locations and deserve seperate entries.

So, there are some puzzles for somebody to work on.

Work on Quake-Proof Theater Scheduled to Start Next Month

Construction of a quake-proof theater building at a cost of $25,000 will be started here soon after June 1, it was announced today by W.J. Zimmerman, who formerly operated two show houses in this area. The theater will be completed and in operation by September 1, he said, giving Lynwood the first motion-picture house it has had since March 10 of last year, when the earthquake destroyed the Lynwood Theater.

The new structure, to be located at Long Beach Boulevard and Lynwood Road, will be of steel and concrete construction, 50x138 feet in size. It will be erected by the Lynwood Theater Corporation, recently organized. Zimmerman has leased the building and will operate it.

An ad in the 1 Nov. 1943 issue of the Compton News-Tribune (Compton, CA) lists the Lynwood Theatre address as 11606 Long Beach Blvd., Lynwood. The phone number was NEwmark 11555. As a kid, I saw “My Darling Clementine” (1946) at that theatre. Possibly due to competition from the very near and much more elegant Arden Theatre, the Lynwood Theatre closed and I believe it was turned into a small bowling alley.

Confirming the address and fate of the Lynwood Theatre of the 1940s as shown in my Aug. 29, 2009 posting, an ad the 1957 Lynwood High School yearbook (Accolade) shows the occupant of 11606 Long Beach Blvd. to be the South-Lyn Bowling Lanes.

I received an e-mail from Pamela Miller regarding the FIRST Lynwood Theatre:

I am searching for some information on a theater that was built by Mrs. R. T. Vilven in Lynwood. Mrs. R. T. Vilven was Gertrude, the wife of my grandmother’s uncle, Richard Tanton Vilven
I have an article from the Long Beach Press-Telegram:

Lynwood, California, August 14
Lynwood’s beautiful new theater, built and owned by a woman, with a woman’s orchestra, women ushers and women in the box office, will open to the public this evening.

The new place of amusement is probably the largest and nost elaborate between Los Angeles and Long Beach and will be opened with fitting ceremonies which will include the personal appearance of representatives of the Hollywood moving picture studios.

Mrs. R. T. Vilven, a pioneer resident and business woman of Lynwood, is the moving spirit of the new enterprise which is meeting a hearty welcome from the people of this community which has heretofore been without a moving picture house.

The theater will seat approximately 1000 persons. It is located on Long Beach Boulevard, at Elmwood Avenue and is seventy-five feet by 135 feet in size, the building alone, exclusive of all furnishings, costing in excess of $35,000.

The theater is elaborately furnished and will rank, it is said, with amusement house in places many times the population of Lynwood.
-Long Beach Press-Telegram.

Here is a photo I found….I believe Gertrude is the woman on the left….but that is just from memory of other photos I have seen. I believe she had died by 1919.

Note: I’ll forward Ms. Miller a link to this page. I think we can say that Gertrude was alive at least through mid-1925. Perhaps a separate page is in order for the first of the two Lynwood Theatres?

As most of the earlier comments and links are largely about the first Lynwood Theatre, perhaps we need a new page for the second Lynwood. Then we can just change the address for this page.

The 1953 U.S. Senate hearings on film distribution practices had a lot of information and testimony from South-Lyn circuit owners Albert and Wayne Hanson. The Arden and the Lynwood were both acquired by the Hansons March 4, 1947. Due to losses they closed the Lynwood on July 16, 1950 and Circle Theatre (Bellflower) the following week. They acquired the Nubel Theatre in Oct. 1947 in Bellflower and closed it for remodeling between June 5, 1949 to Oct. 13, 1949. They also operated the Compton Theatre in Compton and a Vogue Theatre in South Gate. Son Wayne Hanson testified that the grosses at the Nubel dropped by about one-third after spending $180,000 for remodeling and their theatres had steady losses for most of 1950-1953. Their top complaint was the high rental fees demanded by distributors when their theatres were on a 4th or 5th run, yet they were paying film rental as if they were on a 2nd run after downtown. They argued that the film rental extracted from each run should have been lowered commensurately.