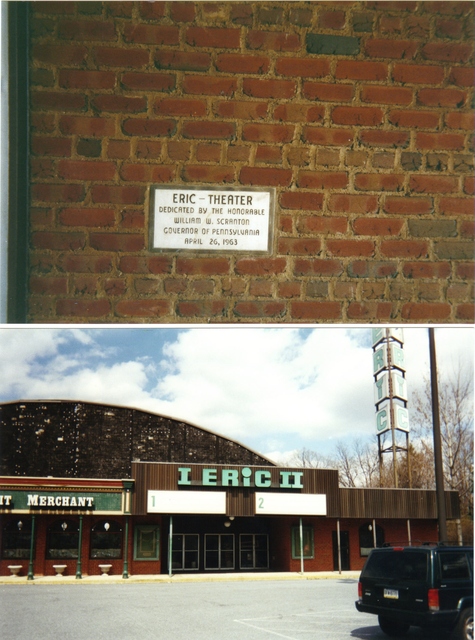 Originally opened July 10, 1963 as a single screen theatre with 1,350 seats, with “Lawrence of Arabia”. The Harrisburg Eric was built for 70mm reserved seat movies.

Twinned prior to 1978, the Eric I & II opened with “Superman” starring Christopher Reeve. The landlord then padlocked the theatre, claiming he was entitled to twice the rent since it had been twinned. Sameric went to court and the landlord lost that lawsuit.

I guess you can’t fight Wall Street,but I would like to think had i been a director such as a Kubrick,no 17 year would run my movie.It never has made sense to me.I saw this non-union crap coming my last year at GCC i was a pro-union manager because the guys in booth put on a good show,never had to give advice,maybe on a trailer,but other than that took their hours down for the payroll.I guess i was just too dang smart to manage a theatre when i saw they had plans for Managers in the booth and on the floor.Glad I got out in 1983.

I.A.T.S.E was a dang good projectionist Union and it was one less headache to have to worry about the booth,in all my theatres ;i was lucky to have highly trained men,not only in putting a good picture on,but most all of them could fix a busted popcorn popper.LOL.

To Mike Rodgers and carolgrau, its sad the way the I.A.T.S.E. projectionists were treated in the 90’s and 2000’s. I myself being one for almost 38 years now, well, I lost my last job in May 2013 to digital, but I had a really nice run. My father was also IA. He worked for 55 years up till 12/31/1992. Sad thing is he passed away the following Oct of 93. In all my years I never once scratched film, even when I worked in adult theatres. My booths were clean as hospital wards. But I was always looked at as too expensive, etc. I remember the late 90’s/early 2000’s when I worked for Clearview in NJ. Always got 97 to 100 on secret shoppers scores for presentation. A month after they got rid of the union in 04, scores went down to 60-70 range.

In the overview, Lost Memory wrote: “Twinned in 1978, the Eric I & II opened with “Superman” starring Christopher Reeve.”

This theater was twinned earlier than 1978.

The comment about the twin in 1978 came from me in a post several years ago. For some unknown reason that post along with several others that I made along way several years ago seem to have gotten deleated when this website went through various machinations.

If I recall correctly the theatre was twinned sometime around in either 1977 or early 1978. It took the landlord a while to find out about the twinning but then the Landlord decided to take action with the opening of Superman. I believe that Superman was playing on both screens.

The landlord literally padlocked the front doors with large chains and padlocks. I know this for a fact because I represented the theatre owner in the court case. The county court found for the theatre owner since the lease did not forbid twinning of the theatre so long as the premises were returned to its original state on termnination of the lease. Needless to say on the settlment of the suit the theatre owner got a sweethart rental adjustment due to the landlord’s actions.

The grand opening of the “all-new” (whatever that means)Eric Twin I and II was December 19, 1973 — and the landlord didn’t figure this out for 5 years?

Contrary to the photo of the plaque, the theatre opened July 10 with ribbon-cutting by Sen.M.Harvey Taylor.

If I may join the earlier conversation on showmanship and Paul Hipple—I had the pleasure of working with him in probably the least glamorous venues in Harrisburg- The Star Art— but I always loved to hear his memories of the golden days of movie theatres. In particular to the Eric Theatre—before it was twinned— Mr. Hipple told me that when “Sound of Music” closed after 67 weeks (I believe) they were still running the same print they used on opening night—that says a lot about the precision of those Norelco projectors in the booth—but more to the point about the meticulous care the IATSE projectionsts took in assuring a flawless show. Mr. Hipple told me those projector gates and film paths were cleaned after EVERY performance, and the mag heads were de-magnitized after EVERY performance. There is no showmanship like that anymore—my last outing at one of the local Digplex Multiplex venues—I had to tell the candygirl the show hadn’t even started 10 minutes after the fact! I remember movies with curtains, and when showmanship was why you went to the movies. Thank you for considering my reflections. L. Weigard