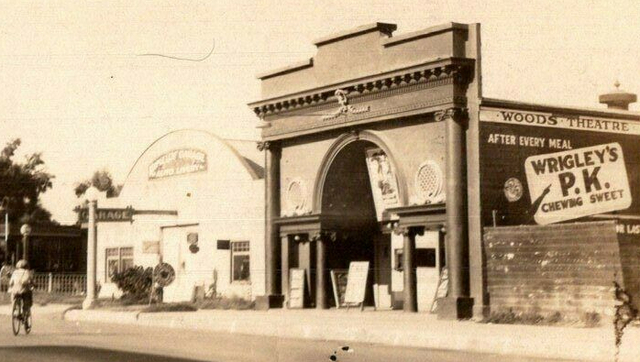 The Woods Theatre was listed as the only operating movie theatre in Chino in 1941 with a seating capacity given as 268.

In 1947 the town of Chino gained a second movie theatre when the Chino Theatre opened (designed by noted theatre architect S. Charles Lee). Whether this rivalry spurred on the owners of Woods Theatre to increase its capacity is unclear, but on January 28, 1949 it was renamed Center Theatre. In the 1950 and 1952 editions of Film Daily Yearbook the seating capacity of Woods Theatre was given as 460.

The correct name is Woods Theatre, without an apostrophe. The owner was an A.L. Woods.

FDY may have been a bit late in upping the reported number of seats in this house, unless the theatre was expanded twice, or its original expansion plans had to be put off. The August 27, 1937 issue of Southwest Builder and Contractor announced an impending remodeling and expansion of the Woods which would double the theatre’s capacity.

One of the posters on the Chino Theater page stated that the Woods was used as an army surplus store in the seventies and was razed in the 1990s.

I’ve come across a couple of references that must be to this theater, in issues of Boxoffice Magazine dating from 1937. They mention the operator as A.L Woods or Ashley Woods, but cite him as the operator of the “Chino Theatre, Chino.” I wonder if Chino Theatre was an actual aka for the house before it became the Woods, or if Boxoffice was just careless about the name?

One evidently not currently listed:

It also looks like almost the entire neighborhood has been redeveloped for residential use within the last couple of decades. The whole east side of the block between C and D Streets is lined with small apartment buildings. The Woods Theatre must have been demolished.

Sometime between 1968 and probably 1971 I worked at the Crest Player Piano shop which is in the front corner of the Crest (Lyric) theatre on Foothill in Monrovia. I remember that the owner came in one day and said that he found an original photoplayer, possibly an American Fotoplayer. If I remember correctly, he removed the photoplayer from the theatre, but it was too large for his Crest player piano shop so he moved it to his garage or somebody’s else’s shop. Does anyone know this story or what Chino movie theatre had a photoplayer? It obviously had to be a theatre that presented silent movies.

Adding to my recent comment about finding a photoplayer, I meant to say that he found the photoplayer in a Chino movie theatre.