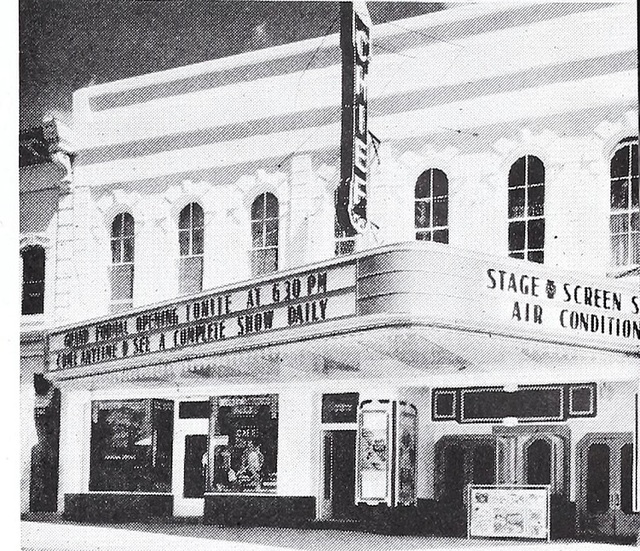 The list of known Boller Brothers theaters includes the Chief (with the aka Royal) in Hiawatha, as a 1929 remodeling project, and says it was operated by Dickinson Theatres. It also says the theater has been demolished.

I suspect that the Chief was on the lot next door east from the old brick building on the northeast corner of Oregon and 6th Street. The single-storey, modern building now on that lot looks to have been built in the 1970s or so. It’s also possible that the Chief’s auditorium was added behind the older brick building to the east, but that seems less likely to me.

I’ve been unable to find any vintage photos of this block of Oregon Street. I did find a single reference to a theater called the Victoria that was showing movies in Hiawatha in 1918. Possibly an earlier aka of the Royal/Chief?

After the Griffith and Dickinson theater chains merged in 1939, the consolidated firm embarked on a project to renovate its theaters. All the plans were designed by the Dallas architectural firm Corgan & Moore. It was at this time that the Royal Theatre in Hiawatha was renamed the Chief Theatre.

A photo of the Chief, sporting its new marquee, is the second in the column on the right side of this page of Boxoffice, August 19, 1939.

The cornice and window trim of the building to the left of the modern building in Street View is recognizable in the 1939 photo of the Chief, so the theater has been demolished.

This theatre was originally home to Hiawatha’s first post office and retail store at 524-8 Oregon Street. It then became the Electric Theatre. George Moore closed the competing Wonderland in 1910 purchasing the Electric Theatre and refurbishing it bringing the seating count to 350. During World War I, the theatre was sold becoming the Brownie Theatre, likely a part of the fledgling Brownie Theatre Circuit (though may have simply been named after Brown County that houses Hiawatha). In 1918, E.A. Van Doran took on the theatre remodeling it and renaming it as the Victoria Theatre with 400 seats – see photo in Photos section. There was an unrelated Royal Theatre that became a 5-and-dime store in Hiawatha. It’s likely that when the sound era came, the 524-526-528 Oregon Street building was gutted to create the larger talking picture theatre using the Royal nameplate before becoming the Chief.

What I found out is that C. (Cornelius) Wagensvelt bought the Royal Theatre in Haiwatha in December 1916 from B.S. Foster. The Royal Theatre was established in the Foster Building on Oregon St. Wagensvelt closed the Royal Theatre in March 1917. A few weeks later het opened The Victoria Theatre in the Shannon Building, also on Orgegon St. He was working together with VanDoran and finally sold the Victoria to him in July 1917. In February 1918 VanDoran also bought te Sixt Street Theatre to close it down. To a reporter of the Brown County News VanDoran said: “Hiawatha is only a one picture show town.”