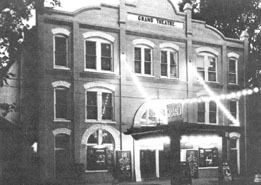 Opened on 27th November 1895 as the Broadway Theater. It was designed in a European opera house style with eight boxes, a balcony and orchestra pit with a large stage that was put to good use in the early years.

The Broadway Theater closed in 1911 unable to compete with newer theaters, but it had reopened by 1914. In 1916 it re-opened as the Majestic Theatre staging vaudeville and later some movie use.

By 1920 it had been re-named Grand Theatre again vaudeville and stage plays first dominated the programming, but movies finally took over. Closed in 1952 it was sometimes used as a school hall.

On the night of 14th February 1960 it was destroyed in a blaze, thought to have been started by a kerosene flare being thrown into the then empty building.

I have an original photo from 1899 if you want it. It was called Broadway Theater then…..Jesse

The Broadway must have reopened by 1914, as it was one of five movie houses at Lincoln listed in the 1914-1915 American Motion Picture Directory.