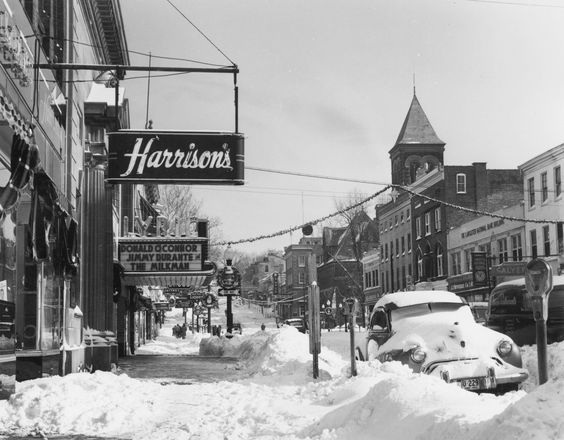 The Lyric Theatre was opened June 15, 1914. It was remodeled on October 8, 1938 to the plans of architectural firm F & Y Building Service, reopening with Clark Gable in “Too Hot to Handle”. Seating was provided for 800.

As the only indoor theater in town for decades, this theater was ‘duplexed’ in 1973 to remain competitive with the newly constructed twin cinema on Sheridan Drive.

The Lyric was independantly owned and operated by the Foote family.

To the best of my knowledge, the Lyric was opened in 1913 at 141 W. Main St. The building still sits in the center of the block, but has been converted into a non descript bank. The original front portion of the building was demolished in the late 1930’s and rebuilt in the art deco style. The only thing that indicates that the building was used as a theatre is a black and white painted sign on the rear exterior wall of the former stage loft.

I spent a great deal of time in the Lyric. By 1961 the Liberty, the Broad and the Palace theatres had disappeared from downtown Lancaster. The Lyric was the last indoor venue. Before the Foote’s took over the theatre it was managed by a man named Tom Alfred and the lady in the box office was the no-nonsense, Eva Kneller. She was fabulous! Nothing nor nobody got past the shifty eyes of Eva Kneller.

I’ve never seen a photo of the 1913 Lyric, but the “streamlined” 1930’s remodel was very slick. The facade above the marquee was a combination of tile and rear lit glass block. The box office was black and green flanked by two sets of deco maple colored doors. The lobby was divided into two sections. The front section left wall had two, three sheet poster showcases and the right wall contained the concession counter. The second lobby was “lounge-like”. Women’s room to the left – men’s room to the right. Above the drinking fountain on the left side was a fantastic art deco glass panel of flamingoes drinking from a pool.

The original auditorium, until the late 1950’s, had a proscenium stage with exits flanking either side. I’ve been told that there was also a small orchestra pit and during the silent days, there was a 2 manual Wurlitzer organ. The decoration around the proscenium was a subtle Greek key design. In the 1950’s the stage was covered over by a wide screen and the exits were moved farther back. The stage behind the wide screen had a 4 story fly space. Until the Foote’s converted it into a health club, the original silver screen and a black shimmer curtain hung there – weighted down by the original sand bags. The light board was controlled by jack knife switches. Below the stage were several dressing rooms with sets of lighted mirrors. During the health club years this area became a swimming pool.

The best feature of the auditorium (while I was growing up) were the giant art deco murals on either side. They were fantastic. Each pictured a satyr-like creature pointing a bow and arrow toward an exotic bird in a tree. They were underlit with a soft light that made the artwork look very mysterious. I remember staring endlessly at those murals before the film started – and when the film ended – they were the first things to re-light. But the one item that still haunts me is the neon clock at the upper rear of the auditorium by the projection booth. I can’t explain the glow in proper detail, but I remember glancing back at it whenever a movie seemed too long or when I didn’t want the movie to end. Although it was a normal size, it was like that giant pair of glasses in The Great Gatsby – always looking down on you.

The end of the Lyric was sad. It had been twinned (as a theatre), turned into a health club, lost it’s marquee, had it’s stage converted into a swimming pool and then, worst of all, had it’s deco front blasted away and turned into a bland bank. It’s a tragedy that no one had the vision to turn the Lyric into some sort of community center. The structure was sound and some of the deco details were still in place. The future generations of Lancaster Ohio will never a know a great, all-American downtown with brightly lit store windows, graceful awnings, the smell of Kenny’s Restaurant and the comforting glow of the Lyric Theatre in the center of it all.

Here is an undated photo:
http://tinyurl.com/2emqqb

The Lancaster Eagle Gazette published a two-part article on the Lyric Theatre April 14, 2014 and May 11, 2014 (for some reason I can read part one in its entirety, but most of part two is behind the paper’s pay wall.)

The Lyric Theatre opened on June 15, 1914. It was designed for owner Edward Mithoff by Columbus architect Fred W. Elliott. In 1927, the Lyric installed a Wurlitzer Hope-Jones Unit Orchestra, which premiered on June 13. Lancaster got its first look at talking pictures at the Lyric on June 17, 1929.

The original entrance of the Lyric was long and narrow, the auditorium having been built behind an existing commercial building. It was this commercial building that was demolished when the front of the theatre was rebuilt in the Art Deco style in the late 1930s.

Reopened as a twin cinema called the Lyric Show-Place 1 & 2 on June 14th, 1974. Grand opening ad in the photo section.

The Lancaster Eagle-Gazette reported that when the theater opened in June 1914, its first attraction is a five-reel film entitled “Loyality”.

Lyric was remodeled in 1938, and reopened later on October 8th of that year with a Metro-Goldwyn-Mayer day, Clark Gable in “Too Hot To Hand” along with M-G-M News, A Pete Smith Speciality (unnamed), and an unknown musical performance.

There’s a lot of information I can find all about this theater after the remodel in ‘38. But I’ll list some of them as follows: The F&Y Building Service did the most part of the theater, including the air conditioner. Extremely artistic is the entrance, done in ivory and black glass inlaid with red carving and satin finish display, 40x60 on each side of the wide doors. The Pylons Distinctive cotta rises in the center of the building, 3 tall burnt sienna pylons. The remainder of the front elevation is carried out in a brick of a soft tan shade. Tall letters reading “LYRIC” in both sides. The capacity increased to about 700-750. The ceiling walls are devised with wide space, with Vestibule and lobby floors are finished in terrazo, with the ornamental design in three colors. The lobby walls are draped with shades of gray with the wainscot on Persian red leather. Deep rise shading to pale pink is used only for the ceiling. Rich deep pile velours on the walls of the auditorium providing an effective background, the front portion, a delicate shade of a peach color, which blends with the brought flame velvet used in the back. The seats were deep comfortable red leather. There is a second floor which led to the manager’s office, projection room, heating and cooling systems, and storage space. The screen is a Walker 15x20 which can screen both American and British films. The entire auditorium expands 60% larger. The front portion of the theater is a major difference, 46x80 with 2 small stores flanking the entrance which featured the marquee. The front doors are on solid birch in natural finish, with soft blue glass bricks inserted in the light panels, and ornamented with the latest cast aluminum push bars. Black glass with self-supporting plate glass enclosure were used for the ticket booth, with chrome plated speaking holes and ticket paying opening. Amber glass blocks which imported from Belgium decorate the face of the booth and lighted from the back. The sand blasted glass valance around the top. Above the marquee comes the ceiling of which is deep ivory, with many tiny lights, is a field of pale yellow terra cotta.The stores, which had a turquoise blue in color had on each side a curved glass motif, giving the effect of tall pink glass towers, which are lighted from the back for night effects, and a flasher border of tiny lights around the drop of the marquee brings into high relief the title of the attraction.