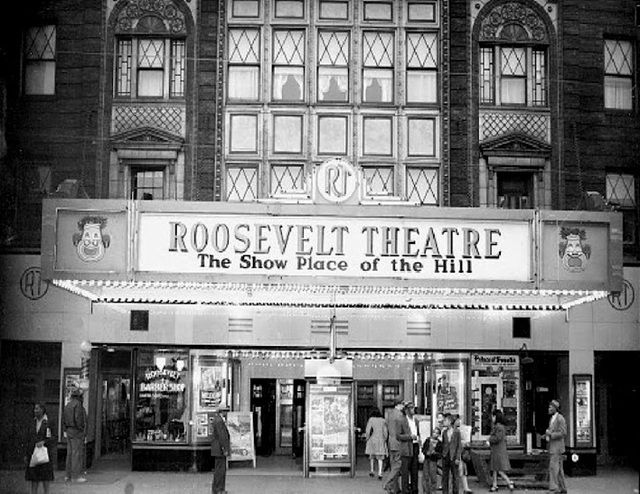 Located on Center Avenue at Dinwiddie Street. The Roosevelt Theatre opened February 15, 1929 with vaudeville & photoplays. The opening movie was “Docks of New York” starring George Bancroft. It was built and operated by the Hendel Corp. It was equipped with a Moller de luxe organ. An oil painting of Theodore Roosevelt, painted by artist & decorator Vincent Scatena hung in the central panel of the main lobby.

The Roosevelt Theatre was still open in 1957.

i think this one is leveled, isnt it?

I, too, first noted the theater being at 1862 Centre Avenue, then found that the address listed elsewhere (I think Pittsburgh Press directories) as 1822. It’s hard to verify now.

After the theater was leveled, the general site was used as a surface parking lot, a super market that closed, and later, as Andrew Johnson noted in the Tribune-Review two years ago, a Subway restaurant and Cheap Tobacco & More.

It was the next-to-last functioning moviehouse in the Hill. Only the long-dormant New Granada Theatre stayed open longer and still stands.

Can’t enlarge the photos on Page 7, LM. No Acrobat Reader on my computer, probably. Sorry. This venue replaced the Victoria Theatre - second of three using that name in Pittsburgh - that had opened on November 29, 1917 at 1862-1864 Center Avenue. The venue also had a bowling alley associated with it. The Victoria was closed on February 23, 1928 by Pittsburgh Public Safety Director James Clark for multiple safety reason as it had been “operated in a careless manor.” The theater was one of many closed in 1928 over safety concerns. It is assumed that the foundation of the theatre was retained and Louis Hendel had a new $130,000 building with a theater, offices, and a rear retail store built in the same footprint. The Italian Renaissance-styled Roosevelt Theatre (as shown above) launched here February 17, 1929 or just about one year from the date of the Victoria’s closure.

The Roosevelt was known for motion pictures but also live music with performances by Duke Ellington and Count Basie. Mervis Bros. Circuit closed the Roosevelt at the end of a 30-year lease on January 29, 1959 with a double-feature of “Johnny Rocco” and “Revolt in the Big House.” It was then sold to the non-denominational Church of Our Lady as a house of worship. The Pennsylvania Industrial Development Authority purchased the facility in 1973 for potential re-use. Unfortunately, the venue was gutted by fire on January 13, 1974 and razed shortly thereafter.