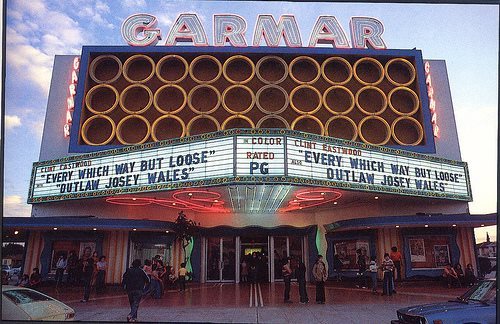 This S. Charles Lee-designed theater was built in the Quonset Hut style. The Garmar Theater opened on March 29, 1950. It was closed in July 1981 and was soon demolished.

Here is a January 1959 ad from the LA Times:
http://tinyurl.com/qggsdl

So…I was cleaning out an old house here in Los Lunas,NM and found a well preserved, unopened bottle of ‘Private Stock’ Chablis from the Marcel & Jeanne French Cafe in Montebello. Before I opened it or tossed it, I Googled the Cafe and found the musings from all you ol' geezers trying to relive your childhoods in the old days of Montebello. If anyone might want this bottle of wine, and will pay the shipping, I will be glad to send it back to California where it came from..

A photo of the lobby of the Garmar was featured on the frontispiece of Boxoffice Magazine’s Modern Theatre section, December 2, 1950.

You can find many pictures of Montebello’s landmarks on this webpage:
View link

FYI, the Garmar got its name from the Olander’s two sons, GARy and MARk. It also was the only theatre I ever knew of that had two enclosed rooms for smoking. Each had a clear glass window, speakers for the sound, and each held about 25-30 seats.

Here is a fresh link to the photo of the Garmar’s lobby on the cover of the “Modern Theatre” section of Boxoffice, December 2, 1950.

The most recent advertisement I found in the Los Angeles Times was on 18 July 1981 for The Fox and the Hound, and the assessor says the mini mall that replaced it was built in 1981, which leads me to believe that it was demolished in 1981. However, American Classic Images has a photo dated April, 1983. Although both films on the marquee were released in May, 1981. http://americanclassicimages.com/Search/CA1743/txtSearch/bell