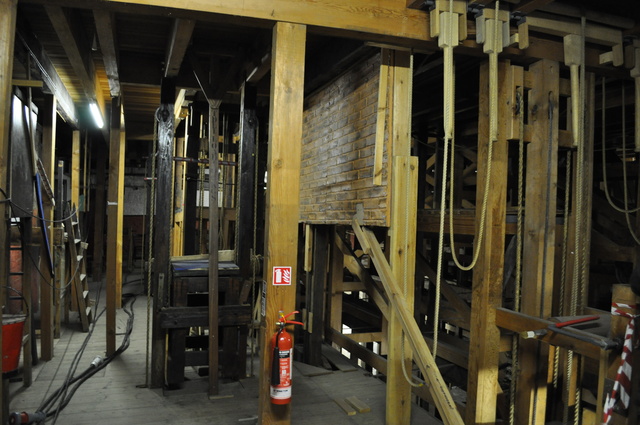 This outstanding building (Grade I Listed) opened in 1867 and was designed by William B. Parnell. It remains, substantially, today much as it was when it first opened.

The theatre was taken over by Oswald Stoll’s chain Stoll Circuit, and became the Stoll Picture Theatre in 1919 (window in stained glass bearing new name still intact) and showed films exclusively from a projection box constructed in the 2nd (of 3) balconies until closure in 1974.

When the screen was removed it was discovered that the final theatre set was still largely in place!

It was restored as a live theatre but suffered a disasterous fire in 1985 when the stage was burned out (auditorium largely undamaged).

The early Victorian stage machinery was painstakingly reconstructed and the theatre reopened.

One of the most beautiful auditoriums in the country, the Opera House is well worth a visit if you are in Newcastle upon Tyne.

Some photos of the auditorium taken in June 2009 here:–

Not difficult to see why it’s grade 1 listed, is it?

When I knew it in the sixties, it showed all sorts of X-rated product. Although the quality of films shown declined sharply after the Tyneside Film Theatre opened in 1968, before that, it showed a much wider range of product and was the place to go for films from directors such as Ingmar Bergman. It was here that I first saw the classic sci-fi film “The Invasion of the Body Snatchers”. I also saw the spoof horror film, “What a Carve Up” and also two classic westerns, “High Noon” and “Fort Apache”. It was a fascinating place to go to when it was a cinema, and I would sometimes go there simply for the pleasure of visiting the place.

In its early years as a cinema the Stoll played first run prestigious films and I have uploaded two such examples to the photos section plus an image of its highly regarded restaurant.

After the 1930’s ‘super cinemas' arrived on the scene the Stoll became a second run house playing a week behind the ABC Haymarket (the adjacent Pavilion,before its 70mm Roadshow era,did likewise with the Odeon).

From the late 1950’s and early 1960’s the (by then) very outmoded theatre adopted a new policy of playing exploitation, sex and horror films from the likes of Gala,Miracle,New Realm, Grand National, Butchers etc…….