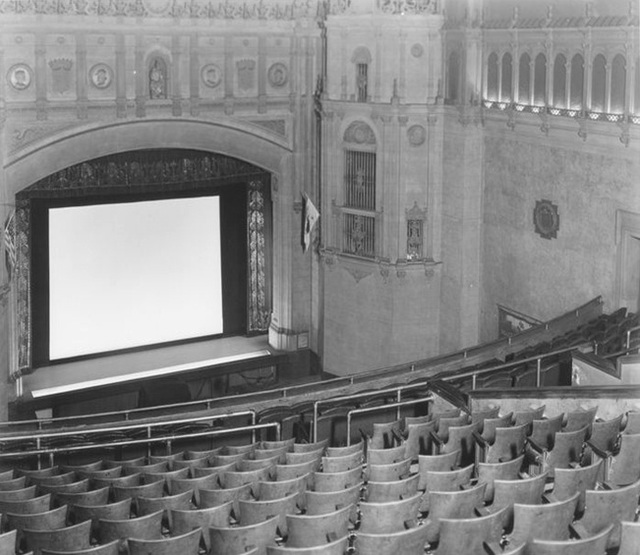 The Yosemite Theatre was opened on July 6, 1892. It was remodeled by architects Weeks & Day in 1920 and re-named Loew’s State Theatre on November 17, 1920 with Carol Dempster “The Love Flower”. In 1922 it was sold to Fox West Coast Theatres

Following the closure in 1954 of the towns' Esquire Theatre, the name was transferred to this theatre.

ksutterfield: I’ve been searching Boxoffice Magazine for info about the Esquire, which is apparently not yet listed at Cinema Treasures, but so far I’ve only found a few references. The May 18, 1946, issue mentions in passing that the Esquire Theatre in Stockton was “nearly completed.” Work was delayed, though, and a short article in the December 14 issue that year announced that the Esquire had finally opened after thirteen months of construction.

The house had cost $200,000 to build and equip, and would be Stockton’s fourth first run theater. Boxoffice gave the seating capacity as 1190, and described the auditorium as being decorated with fluorescent murals having a Chinese theme. The article didn’t give the name of the architect, but the mention of blacklight murals makes me wonder if it might have been designed by Gale Santocono, who was very active at the time and used blacklight in theater decorations frequently. Even if he wasn’t the architect, he might have done the decoration for the Esquire.

I’ll keep looking for more info, but I don’t think Boxoffice ran any articles with photos of the theater. If they had, I’d probably have found them by now.

Thanks Joe, the Esquire theater I worked at was the renamed and remodeled Fox State Theater (see your Aug 12th post above). The only photo I’ve ever found of the Esquire is a post card I found on the internet.

I’ve come across something about the State Theatre that doesn’t fit in with other pieces of information I’ve found, especially the information from Boxoffice I cited in my first comment of August 12, 2009.

A 1922 issue of the architectural journal Pencil Points ran an article about movie theatres penned by architect Emil M. Mlinar, a former associate of C. Howard Crane. Among the illustrations is a photo captioned “Proscenium of Loew’s State Theatre, Stockton, Cal. Weeks & Day, Architects.” The photo is recognizable as the same theater in the photo from the S. Charles Lee collection to which I linked in the second comment on this page.

So, assuming that the magazine didn’t make a mistake, the State Theatre opened as a Loew’s house, and was designed by the same firm as the Loew’s State in Los Angeles and the Loew’s State in Oakland. I can’t find a Loew’s State listed for Oakland at Cinema Treasures, so either it isn’t listed or it’s listed under another name and is missing the aka. The Fox in Oakland was designed by Weeks & Day, but I’ve never seen anything suggesting that it was ever a Loew’s house.

The volume of Pencil Points with the photos can be seen at Google Books. Here’s the link to the Stockton photo. Scroll up a few pages to see the Oakland photo.

The Yosemite Theatre opened either in 1892 or 1893. The conversion of the house into the State Theatre took place in 1920. In a column listing projects in the works for 1920, the December, 1919, issue of the San Francisco-based professional journal The Architect & Engineer included Weeks & Day’s remodeling of the Yosemite Theatre in Stockton. The projected cost was $130,000.

A photo of the original, San Joaquin Street entrance building of the Yosemite Theatre, probably taken in the 1890s, can be found at the very bottom of the Stockton Theatres Over the Years page on Wright Realtors' web site. There is also a photo of the original proscenium arch with its advertising curtain.

Farther up the page (theaters are in alphabetical order) there are photos of the Main Street entrance of the house as the State and as the second Esquire.

There were two Stockton Theaters named The Esquire. The one pictured above was next door to a luggage store and Union Bank to the right. Mostly 2nd run and B films it had its hey days when it managed to first run all the James Bond films except From Russia With Love. Not a big auditorium it had a small balcony.

The Lyric opened in 1914 or 15. In the 30s it became The National. In the 40s it was The Roxy. In the first part of the 50s it was the Lux. Toward the end it was called The Uptown. The Bank of Stockton Archives has the only picture of the Uptown just before it was destroyed. Most of the downtown theaters went through name changes and moves. There was an Esquire #1 then the Esquire #2 on Main St. near the Fox Californian. Through the 50s and mid 60s the downtown theaters (other than on the infamous skid row) were The Fox, The Esquire #2 and The Ritz about a block East on the South side of the Street. The Stockton opened in 1946 in the Miracle Mile District. Only the Fox now the Bob Hope Theater is still operating. The Stockton exists despite changes after a fire almost 40 years ago. Not showing features it had a shop and restaurant lobby area. Inside the auditorium the main floor was converted to a table area. Currently the entire facility is closed due to safety violations. May never reopen. I am working on a book about these 5 theaters and 3 of the drive ins prominent during the period 1950 to 1965.

I remember seeing God’s Little Acre and The Big Country there. Both were filmed near Stockton in the countryside. I knew the man who helped supply all the workers who built the sets. The Esquire was proud to present these movies since they involved Stockton. It was a large theatre with good projection and great sound. 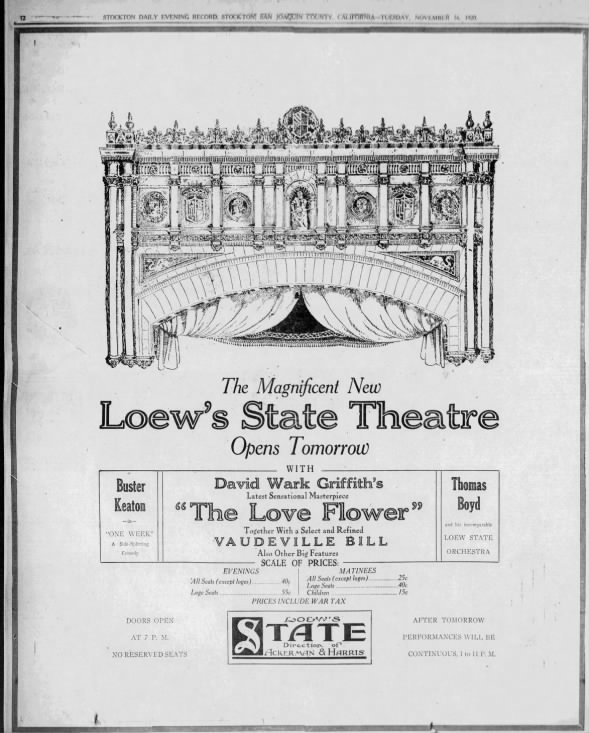 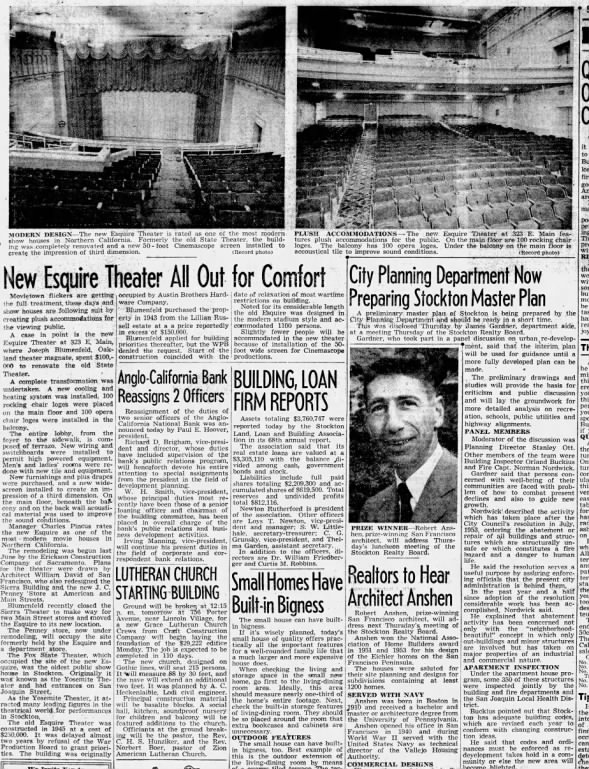