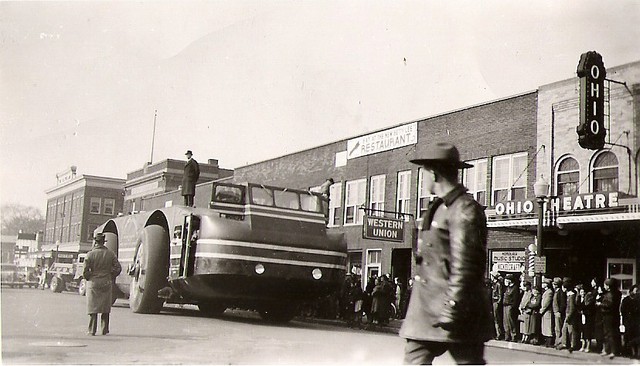 Located on State Street at Harbor Street, the Ohio Theater is listed in editions of Film Daily Yearbook from at least 1941 through to beyond 1950.

The Ohio Theatre has been demolished. The book “Conneaut,” by David B. Owens, says that it was torn down in 1960 and replaced by a drive-in restaurant. Today the site is occupied by a filling station.

Owens' book (Google Books preview) has an undated aerial photo that shows the relationship between the Ohio and the State Theatre down the block. The State had a stage tower, and the Ohio did not, but the auditoriums looked to be about the same size.

This Rootsweb page about Delos R. Bly has his obituary, published in 1944, which says that he had owned the Ohio Theatre in Conneaut since 1929. As the Ohio is not listed in the 1929 FDY, it must have opened too late that year to be included.

D. R. Bly also owned the State Theatre at the time it opened in late 1925.

The Ohio Theatre and the adjoining Bly Block building were razed in April 1963. The State Theatre continued in business for a few years more but wasn’t torn down until 1972. Mr. Bly built and owned both theatres and the adjoining building for a number of years. Not sure about the Ohio but he sold the State to the Shea Organization sometime in the late 1920’s.

What is that huge vechicle in the photo above?

Theater was demolished in 1963.