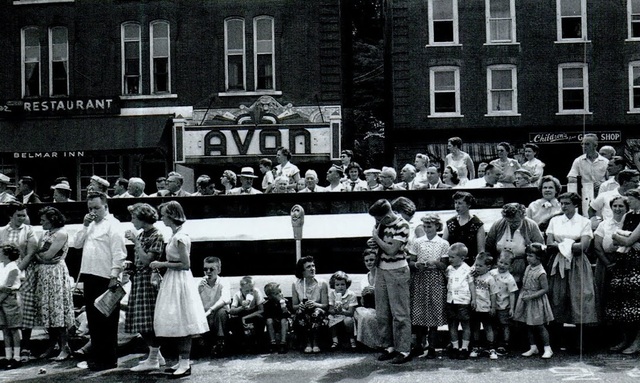 Originally opened as the Avon Theatre on August 14, 1936 with Bing Crosby in “Rhythm on the Rang”. It had a seating capacity of 600. This small-town cinema is located in east-central Vermont, just west of the Connecticut River valley. The Avon Theatre was closed in May 1960.

It reopened as the Ellis Theatre on December 17, 1960. It was selected for the premier of the "Simpsons" movie on July 21, 2007, with Simpsons creator Matt Groening in attendance. It was closed on July 9, 2008, due to a fire. In 2009, conversion began to change the theatre from a twin to a triplex.

Here is an update on the repairs to the theater. It will become a triplex: http://www.vpr.net/news_detail/86777/

Small images of the interior of the Avon can be seen in Boxoffice magazine, September 19, 1936. See ad on right side.
View link

Link to story about an Art Deco relief discovered at this theater during renovation work: http://www.preservationnation.org/magazine/2011/july-august/leslie-fry.html

GOOD NEWS GOOD NEWS The theater opens at 0000 hours on July 2011 for the first showing of Harry Potter. The cinema is back and is opening. The theater is back better then ever with a triple screen. Respectfully, The New Manager

The non-recorded line is phone number 802-885-1009. The website with all the current postings is www.springfieldcinemas3.com

Please note there is a s on cinema.

We are continuing the construction prior to opening and every day brings us closer to a finished theater. (This week we anticipate the outside marque going up.) All 3 theaters are showing and Captain America is starting this Friday. I am personally looking forward to this one.

The large movie hall (the 3D theater) is an experience to have. The seating has been done to give a large amount of leg room (it may have reduced the number of seats slightly but the comfort is unmatched any where (and I’m a long time movie goer.

I encourage everyone to stop by and just say hi, we can show you around.

Have a great day.

When the agent working on the theater report survey for MGM arrived in Springfield in May, 1941, he found two movie theatres: this one, then called the Avon; and a 520-seat house called the Ideal Theatre. He was supposed to take a photo and fill out a report for every theater he found, but he only did this for the Ideal and not for the Avon. He mentioned the Avon as a competing theater for the Ideal, but never reported it.

Linkrot repair: The photos of the Avon Theatre in Boxoffice of September 19, 1936, to which Gerald DeLuca linked earlier, can now be found at this link.

The article says that the theater that became the Avon had been closed since 1931, but doesn’t give the name under which it had operated previously. After extensive renovations it reopened as the Avon on August 14, 1936. Both the Avon and the nearby Ideal Theatre were operated by Joseph Mathieu.

The Cinema Data Project has a page for the Avon, but it doesn’t mention the theater’s earlier history or earlier name.

Here are some additional links to photos of the Springfield Cinemas 3 and its predecessors:

Maclay Architects, designers of the rebuilding project after the 2008 fire, have this page featuring several photos of the neo-vintage decor of the entrance and lobby, and some photos of the reconfigured auditoriums (as the Springfield Theater, the house had only two screens.)

This page from Film-Tech Cinema Systems has several photos of the Springfield Theater as it looked around the time of the premier of The Simpsons Movie in 2007.

The web site of photographer William Lashua has four pages of photos of Springfield taken between 1940 and 1970 by his father, Bernie Lashua. Among them are several photos of this house as the Avon Theatre and later as the Ellis Theatre (you have to hunt them down among the thumbnails, but they aren’t too hard to find for a practiced eye.) The collection includes several interior shots. There are also a few photos showing the now-demolished Ideal Theatre. Access the collection from this web page.

I haven’t yet discovered the name under which this house operated prior to closing in 1931, but it might be found in a FDY from the period.

The Avon Theatre actually opened on August 14, 1936 with Bing Crosby in “Rhythm On The Range” along with an unnamed Traveltalks, an unnamed Happy Harmonies, and a RKO/Pathé Newsreel.

Some information about the theater goes as follows: Lake N. Wilkins, who has been the manager of the nearby Ideal Theatre for many years took the standard role as manager for both theaters. Edwin Pelletier of Woodsville, New Hampshire, was the operator, and Mrs. Murial Burt who was formerly employed at Paramount is the cashier. The doorman will be held by Geni Aspeso of Brattleboro. Lastly, the ushers were Willia Coffee and Roland Abbott, and they will be garbed in coats of blue serge with the Avon name on the left lapel with white trousers and black bow ties. The curtains of the Avon were treated with panels of rock wool, over which are draped of scarlet and gold damask and the same color scheme holds where the other drapes were used. The remainder of the wall under the balcony is treated with Nuwood in a two tone effect. There are no ceiling lights, but the house lighting appears along the sides of the wall in the form of groups of shielded colored bulbs in subdued tones. Spanish balconies flank each side of the stage and red and gold damask drapes were added. The proscenium valance on both colors of the damask are with sateen and the draw curtains are red and gold Lexington brocade, sateen lined. The screen’s size is unnamed but was an extra large daylight silver and seamless. The seating ranges were widely enough, each fully upholstered and are reached along aisles covered with royal cashmere carpets in designs and tones. Seats of the same type were recently installed at the Metropolitan Theatre in Boston, Massachusetts. The capacity is a total of 546. Air conditioners are also installed and guaranteed (by Springfield’s Plumbing & Heating Company which also worked on the plumbers, heating specialists, sheet metal work, and oil burner installations) every 3½ minutes by 3 “Airate” ventilating fans of 22,000 cubic foot volume, which extends through the building, foyer, restrooms, office, and others. The foyer is in a design of 4 colors with mirrors and panels and leading off from it are the offices, cashier’s booth, and large ventilated restrooms for both genders. The electrical contractors were Geo H. Abbott and his son’s company of Springfield. The marquee, which was placed in name earlier 3 days prior to its grand opening carried the name of the theatre is large letters bounded by neon lights in 3 colors. The sound equipment is an RCA Protophone system, and there are 2 Simplex machines.

It became the Ellis Theatre on December 17, 1960 with Bing Crosby in “High Time” after the Avon Theatre closed its doors in May 1960 after finding new ownership.