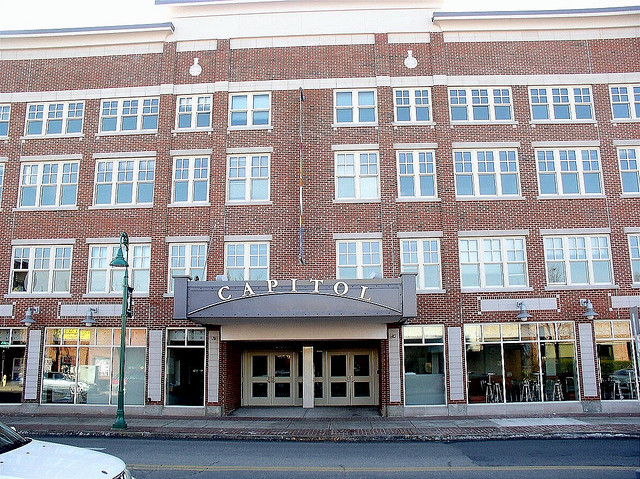 The Capitol Theatre was opened on January 21, 1926. By 1941 it was operated by Warner Bros. Circuit Management Corp. The town of Willimantic has renovated and reopened the long-shuttered Capitol Theatre as part of a rebirth of its downtown.

Since around 2001, the Capitol Theater has become a regional school for the arts.

Unfortunately the entire interior to this beautiful theatre has been gutted as part of the renovations. A new, much smaller, auditorium space will be built inside along with many classrooms for the arts school that will now be housed in the building. See photos of construction as it progresses ar View link and see a virtual tour of what the auditorium will look like when completed at http://www.eastconn.org/Prekstudents_ACT_tour.htm . It is a shame that they had to demolish the interior and rebuild it much smaller to make room for the school. They should have done what the new arts school in Waterbury at the Palace Theatre has done: completely restore the old theatre and build classrooms in a new building next door.

I have very mixed feelings about the conversion of the Capitol. When I moved to the area in 1971 the theatre was in basically sound condition but many furnishings had been removed and there was some water damage.

The interior was lovely, though. It had an unusually wide aspect and a fabulous balcony with grand marble staircases. A very large stage grid system and basement dressing rooms gave promise of a wide variety of events capable of being presented some day.

Later a town committee was charged with restoring the theatre. Instead of that happening, Eastconn – a powerful regional educational organization – commandeered the process and changed the plan to the current one, which ruined the magnificent theatre in order to build the arts magnet school.

As a UCLA theatre arts graduate myself I welcome the school and think it provides a wonderful opportunity for youth in the area. But it should have been built in one of the several empty office buildings nearby and the theatre renovated as a community asset as well as a showcase for the students. That would have been a real win-win.

Instead we have a very nice magnet school but have lost the sole remaining grand classic theatre left of the four that once graced this charming little mill town. My comment at the time this was proposed was “Must we destroy the Capitol Theatre in order to save it?”

Does the Capitol back up to the railroad tracks in Willimantic? I am a railfan and have seen several books which feature color rail photos taken in the 1940s and 1950s. In those taken in Willimantic there is a big theatre with a tall stage-house in the immediate background. The rear stage wall overlooked the railroad yard. Is it the Capitol Theatre??

It sure does back up to the tracks – but the pictures you have seen might not be the Capital. In the 50’s there were two movie theaters side by side: facing them, the Gem was on the left of the Capitol. Both used to border an alley in back where the tracks ran behind a tall chain link fence. Willimantic was such a great place to be a kid until the mills started having union problems. When I was only 10 or 11 my mother would give me .45 on Saturday afternoon and my friend Pam and I would head for the Gem. (We weren’t allowed at the Capital: that’s where the ‘dirty movies’ were ;)

ConnSwampYankee- thanks for responding to my question regarding the rail tracks. In the photos I have seen, some in color, the theatre had a big stage, the roof of which towered over the auditorium. I didn’t realize that there were two theatres there, side by side.

Should be listed as open now.