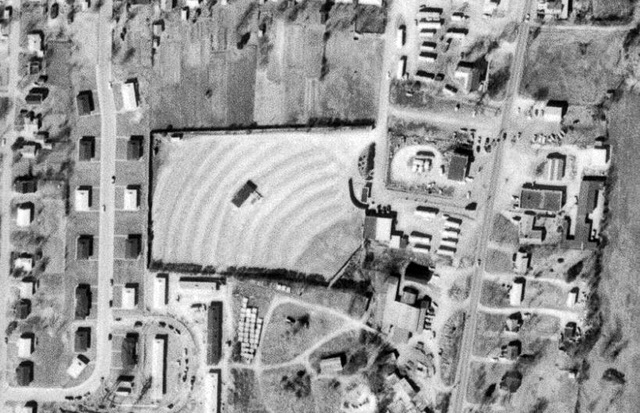 The Murray Drive-In opened prior to 1955 when it was operated by Sykes Bros. It was open throughout the 1960’s, 1970’s, and as late as 1983, which was the last time I went there. It closed sometime in the mid-1980’s, and I’m not sure what is on the site now. It was located on the edge of town on Highway 121 (South 4th Street) just down from the corner of Glendale Road, where the (sadly now too long gone) KN Root Beer Drive-In was located.

It was fairly small drive-in, but thrived for many years. I believe it was owned by the same people who owned the Cheri/Capri theatres in Murray. My first trip to the Murray Drive-In was in about 1969 or 1970 to see “Blood Feast”, Hershell G. Lewis' famous (or infamous) gore classic, which was made in 1960, but re-released annually to Southern drive-ins through the 1970’s. On the other hand, I also saw “The Last Picture Show” here!

One of the last times I went there, in the early-1980’s, on a week night in late fall, we were the only car in the drive-in for a double feature (“Galaxy of Terror” & “The Thirsty Dead”), and they showed both features just for us rather than just closing and giving us a pass to come back some other night!

I have a lot of good memories of this drive-in, and I’m sad it’s gone.

I grew-up in Murray and remember that “Jim Thorpe — All American” was the first movie that I saw at this theatre. I don’t know if this was the first film they played but if not it was among the earliest. The Internet Movie Database (IMDb.com) shows this film as being released on August 24, 1951 and since films typically played in Murray about six weeks after their release this theatre must have opened in October of 1951.

I started work at the Murray Drive-In when about 15 years old. Barbecuing ribs and chickens was my first job as well as making bug-enhanced cotton candy. The ‘Boss’ would often appear out of the darkness just before intermission to throw a quart of vegetable oil into the barbecue pit and then dissapear again into the night. The resulting flames really got people out of their steamed-up cars and into the concession stand. I usually could not save the chickens when this happened.

I loved making popcorn, frying burgers and mixing the mustard-heavy slaw. Pizza was my favorite.

Most of my time was as projectionist. Showing classic ‘B’ and'C' movies to audiences that were far more interested in making out and producing front page drive-in news.

I could not imagine a better experience for the teens of any generation.

While H.P. Vinson had an interest in the theatres in Murray, the main man was Tommy Brown, who lived in Murray. H.P. booked the product for these theatres in Murray from his office at the Sundown Drive-In, in Columbia, TN. I worked for H.P. in Columbia. I recall being at the Murray Drive-In, in the summer of 1979. They were running ‘Grease’ and ‘Saturday Night Fever’ as a double feature. I remember they still were running carbon arc, but had adapted to larger reels, to only have 1 or 2 changeovers.