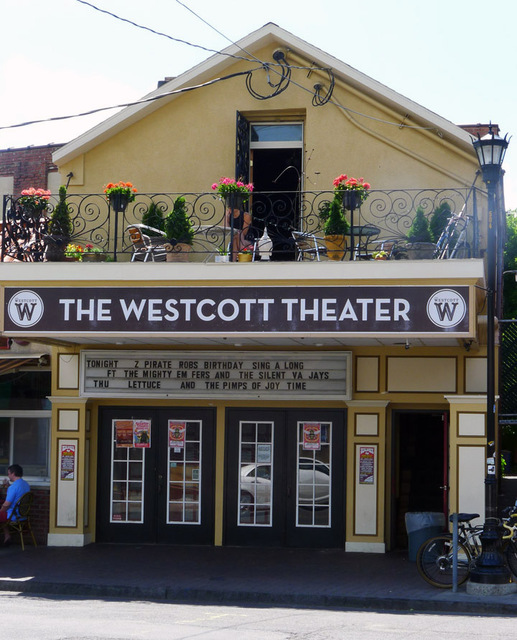 The Harvard Theatre opened on April 11, 1926 with Colleen Moore in “Irene”. In 1944 it was renamed Civic University Theater. In 1948 it was renamed Wescot Theater which closed in 1968.

New owners took over and it reopened as the Studio Theater on October 16, 1968 following a remodel to the plans of architect Alan Kosoff. It operated as an art house theatre. On November 26, 1989 it became a discount theatre renamed Westcott Theatre which closed on October 18, 2007.

In 2008, following a remodel (which removed the façade created by Alan Kosoff), it re-opened as a performing arts center & bar.

It looked like five-something to me, but it could be a six.

I think you’re right. I was looking at that close to six a.m. Not at my best.

Sadly, the Westcott must now be listed as closed. Nat finally thru in the towel on the 18th of this month, the last feature was In The Shadow Of The Moon. It was hard for the theatre to get films protected from the Carousel Mall screens, even arthouse programming. Also, the building is getting pretty old, needed new HVAC and other improvements.

The theatre first opened in 1928 as the Harvard, then changed its name to the Studio sometime in the seventies, and was part of the CinemaNational chain for a while. After they pulled out, it ran porn as an independent for much of the late seventies, then sub-run fare in the early eighties after changing its name to the Westcott. They finally switched to art/alternative sometime in the nineties under leaseholder Nat Tobin, who also runs the Manlius Cinema. Russ Percival was Natâ€™s manager/operator here for much of this era, he was the only union projectionist left in Syracuse after the closing of the cityâ€™s older single screens and multiâ€™s.

Sad to see this one go after so long.

The theatre will reopen in January as the Westcott Theater according to recent media reports. It will feature live music, comedies, and plays in addition to movies.

From that picture above, I wouldn’t even have recognized it. I recall more of a classic marquee when I was there in the ‘70s and '80s; unfortunately, for all the times that I saw “Rocky Horror Picture Show” there, I haven’t a single picture of the building.

This article says the Westcott was once known as the Kallett:
http://tinyurl.com/5pztwa

Went through a number of name changes . . unfortunately Kallet, as sited in the Syracuse.com article, was not one of them.

During 50’s and 60’s (and possibly earlier) operated as the Westcott and owned by the Gilbert family. Played the French film A Man and a Woman (1966) for well over a year … hyped as audience demand but supposedly distribs would not book the theater because they could not recover their percentage of the gross. Fact or urban legend?

At some point (after worn out print of A Man and a Woman could no longer run through the projector?) theater changed hands and operated as The Studio (late 60’s/early 70’s). But once again (another change of hands?) returned to operation as the Westcott.

The Westcott was a great place in the 1980s. Thanks to their low sub-run prices, I probably saw nearly a couple of hundred movies there. Crocodile Dundee, Commando, Predator, Beverly Hills Cop, Karate Kid, Lethal Weapon, Hot Shots, Indiana Jones and the Temple of Doom, Last Starfighter, Fletch, Secret of My Success, The Right Stuff, Extreme Prejudice among too many others to recall. Most films were shown for one week, although a few really popular ones were held over for a second week. Sound was pretty bad at times, though, often turned up way too loud, which didn’t help with the frequent crackles and other noises.

According to Wikipedia the Westcott is housed in a building which was erected in 1919. Also, from another source, there was an extensive renovation of the venue before it reopened as a performing arts center.

The Harvard Theatre launched April 11, 1926 with 1,000 seats and an architecture described as Spanish Renaissance playing Colleen Moore’s “Irene.“ Getting a major refresh and new operators in 1944, the venue became the Civic University Theatre (formerly the Harvard). In the Fall of 1948, it became the Wescot (just one T in the entirety of its naming) Theatre.

The Wescot closed at the end of its 20-year leasing agreement in 1968 but got a new operator and look. On October 16, 1968, its shocking transformation by architect Alan Kosoff was complete and the Wescot became the Studio Theatre reopening as an art house with “Bell de Jour.” It transformed to a discount run theatre on November 26, 1980 called the Westcott Cinema. The venue would go back to art film though closing October 18, 2007. In 2008, it lost its plaster front from the 1968 makeover and became the live performance space, the Westcott Theatre.