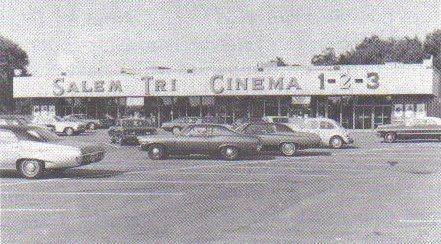 The theatre, which opened in 1972 as a Jerry Lewis Cinema, later became an intermediate-run house playing films after they debuted in nearby Lawrence, Massachusetts.

When Loews opened a large 20-screen megaplex in the neighboring town of Methuen, Massachusetts, the old Salem Tri’s days were numbered and it closed in February 2002.

The cinema was also the only movie theatre in the town of Salem and the last New Hampshire property for National Amusements.

The theatre was demolished and sold to a large toy store. A Babies R Us now stands on the site.

The alternate name of Jerry Lewis Cinema should be added here.

It originally opened with a $2.25 night admission with 75 cents for children and matinees.

Saw Spaceballs here when it still ran first run films. Also the only theater that showed Close Encounters in Dolby Sound in NH.

When Sack Theaters opened their small triple in Salem, MA their was some confusion since the local papers carried ads for both and neither specified the state they were in.