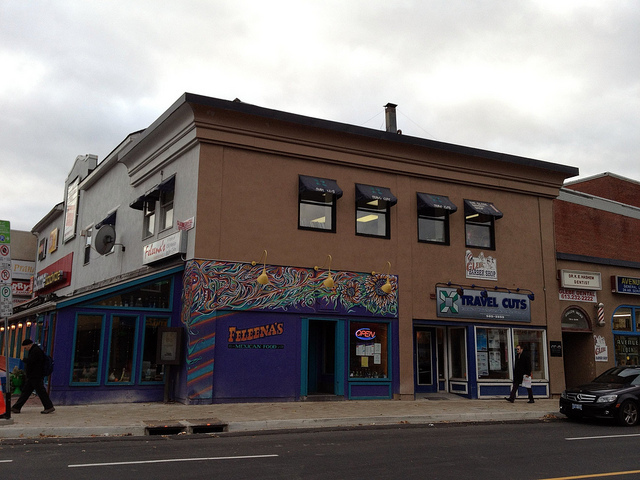 The Avalon Theatre opened November 16, 1928 with William Boyd in “Dress Parade”. Following a renovation which removed the original Atmospheric/Spanish Mission style decoration, on August 22, 1947 it was taken over by Odeon Theatres (Canada) Ltd. and until its closure in 1956, it was known as the Glebe Theatre.

The building still exists. It’s a hardware store and restaurant with entrances on 2nd Avenue.

The last movie was on the night of 17 Oct 1956.The auditorium was gutted and became a car dealership until 1974.The space is now occupied by Home Hardware.

Here is a contemporaneous view:
http://tinyurl.com/yc3h6x3

My wife is the granddaughter of P J Nolan, who designed and built the Avalon (the original name of this theatre). He owned 3 theatres and operated 4. He also became the mayor of Ottawa.

Today (Aug 25) we are headed down to the open house of “The Acting Company” who are now setting up shop in the old theatre space to see what remains of this theatre.

Little known factoid – my wife’s father was Leo (the lion) McCarthy. He taught the returning soldiers from the war in this theatre to help them get caught up on their schooling.

Earlier they used to run vaudeville in this theatre as well as “talkies”.

This Spanish Mission atmospheric theatre seated 900 at opening on November 16, 1928 in what was called the fast-growing Glebe neighborhood. With Wurlitzer organ, cloud and star projection on the arched ceiling, and high dollar Simplex projection, this was going to be a modern talkie palace. The theatre was P.J. Nolan’s third theater in Ottawa with the Rex and Columbia. But this was his first to be built for talking films. Ironically, the theater’s sound equipment was delayed and the advertising angle was lost on the opening silent film, “Dress Parade.” Silents would run until March of 1929 when the equipment finally arrived.

P.J.’s son, P. Ambrose Nolan was the original manager and did a full-page tie-up with record stores upon the arrival of sound offering free tickets to anyone purchasing the soundtrack song from the first talking feature there, “Little Mother.” Why this film? Because the song’s title was, “Avalon Town” the name of the theatre. It would be known informally as the Glebe for Henry Neunin who took on the theater on a ten-year lease March of 1936. After closing for a retrofit and officially becoming the Glebe Theatre for Cineplex Odeon Circuit, the theatre had its final operator beginning on August 22, 1947.

Cineplex decided to let its ten-year lease lapse closing in 1956. Morton Motors took on the facility transforming into a Volkswagen launching March 8, 1957.

Actually, it would’ve been Odeon that closed the Glebe in 1956 because Cineplex did not exist until 1978. 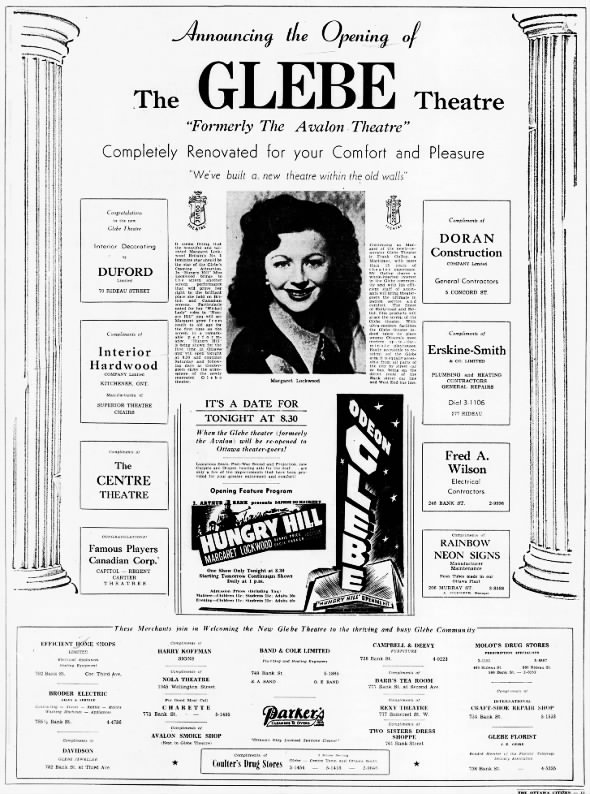