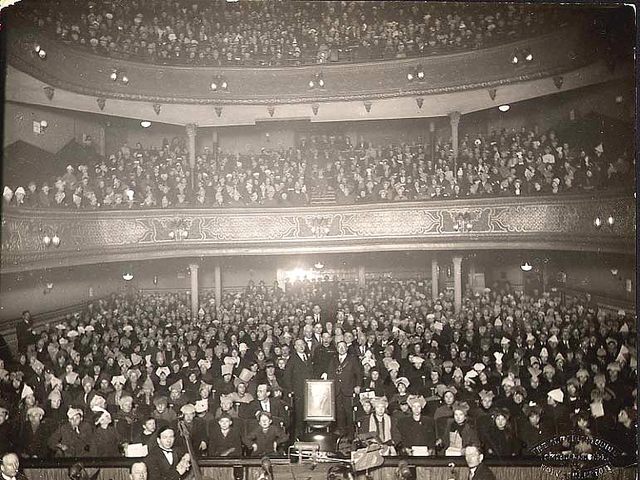 The Empire Palace of Varieties opened on 5th December 1898 and was designed in a bizarre Moorish style by the architectural firm Owen & Ward. At opening it had a seating capacity of almost 2,000. As in most variety theatres, films soon became an ‘act’ on the bill; and in the Summer of 1910 films were shown every afternoon using the name ‘Cinematinees’.

In the early-January 1921 it closed briefly when alterations were carried out by theatre architect Bertie Crewe. It re-opened on 21st February 1921 as the Hippodrome Theatre. From March 1928 it was taken over by the General Theatre Corporation(GTC) who were themselves taken over by Gaumont British Theatres in May 1928.

Live shows continued until 28th September 1931 when cinema use began. It was to be used as a ‘stand-in cinema’ for Gaumont while they demolished their Agricultural Hall Cinema and build the Gaumont Palace Theatre. The first film programme at the Hippodrome Theatre was George Bancroft in "Derelict" and Lupino Lane in "No Lady". Almost a year later the Hippodrome played its final film Lew Ayers in "Impatient Maiden" on 27th August 1932.

The Hippodrome Theatre re-opened as a live theatre again on 5th September 1932, the same day as the brand new Gaumont Palace Theatre opened. Over the years many famous artists appeared, including a visit by Louis Armstrong. From November 1946 it became a theatre within the mighty Moss Empires Theatre chain. Sadly, the Hippodrome Theatre was destroyed by fire on 19th February 1956. The remains stood as an ‘eyesore’ until 1958 when what was left was demolished and the site redeveloped, with a furnishing store being built on the land.

Hmmm I remember the day after The Theatre had burned down. My Gran and Aunt had gone to that last show.. “Hilder Baker” was the star act..

Sorry to correct old memories but I have the Hippodrome programme for the last show – week beginning 13 February 1956. The show was “Magicana” featuring Virgil, Premier International Illusionist with his world famous mystery review. His assistant was Julie – The Sweetheart of Magic. There was no other act in the show. The theatre burned down the following weekend before the next week’s show.

The Last Owners of the theatre was “The F. J. Butterworth Circuit”

@ Davethehistorian I remember my Nan went as part of a works outing. And she was known for turning up at the last performances of Theatre and Cinemas before they burned down. She missed the Last show of the Odeon Walsall by a Fluke I had a bad cold,. I cut out a picture in the Express and Star to put on the Schools news board at the time. Will have to do some more research on the Theatre

Dave is right. The Fred Butterfield achives also noted it would have cost £125,000 to do a rebuild.. The Family Still own and have maintained to a very high standard 2 theatres The Richmond and the Boscombe Hippodrome.. As an Independant Theatre & Cinema Owner myself. I must admire for trying to keep his circuit going as long as he did…

Davethehistorian, you’re right Virgil was the last show at the Hippodrome, I was a member of the Virgil show along with my now wife Jackie who was one of the dancers in the show, the week at Wolverhampton was the first week Jackie and I had started going out, we’d only met a few weeks before that when we joined the show, we got married when the show closed at the end of 1956, we were lucky that we decided to load the show out that Saturday night instead of the Sunday morning, we had the fire curtain down whilst we were packing, the fire must have been burning in the Auditorium and we didn’t know anything of it until it was gutted the next morning, we could have lost the whole show and that would have been the end of Virgil’s world tour as it was we stayed friends and in touch with Virgil until his death in 1987 and Julie in 1999.