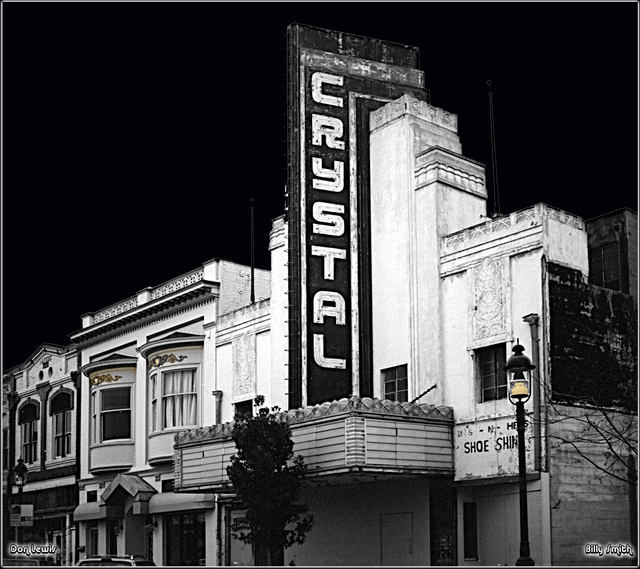 Thanks for the link Ken. The new 14 screen multiplex on the site of the old Brown’s Opera House/T & D/Crystal is a very nice looking building—for a modern structure.

Evan after painting, if you know where to look on the wall of the brick building next door to the new Maya Cinemas, you can still see the outline of the Crystal’s balcony. Further back in an airspace between the old and new building is a wall that still has stencil work on it from the Brown’s Opera House/T & D/Crystal.

1964 was quite a year for an Iowa farm boy/projectionist who was first introduced in to the world of X rated movies at the Crystal.
The owner, Jerry, (I can’t remember his last name) was still another colorful theatre owner/operator. His trademark was a large cigar. Very nice fellow who always intrigued me as to why he would operate an X rated movie theatre. I believe I now undersand that he was making money. Nice basic projection room with Simplex E-7 projectors and Peerless Magnarc arc lamps. Definitely a “fun” place to show movies especially not knowing, going in the first time that motion picture film could be so sexy. It was tough concentrating on the upper right hand corner for changeover cues. Really tough.
Once Again, Respectfully Submitted,
Ben Kehe
Motion Picture Projection Services, Inc.
Broken Arrow, Oklahoma
918 906 3715

And in its silent film/vaudeville days, the Crystal, then called the T & D, was a very attractive opera house/vaudeville theatre. Just last week I came across a photo of a prize fight on-stage looking out at a filled house. The opera boxes were an interesting contrast to the on-stage fight. The T & D name was carried over to the new theatre (now the Fox) in 1921. The former T & D closed for a few years and reopened as the Crystal in the mid ‘20s.

The remodeling of the Crystal Theatre to the Art Deco style was done in 1936. Architects for the remodeling were Otto A. Deichmann and Mark T. Jorgensen. A rendering of their design was published in the November 11, 1936, issue of Boxoffice Magazine, though the caption misspelled Jorgensen as Torgensen.

My Uncle, Lawrence Borg, became half owner of the Crystal Theatre Lease and Business in Salinas, California, in 1928.

In 1953 the Crystal Theatre property was sold, although he maintained a one-half interest in the El Rey Theatre until the colose of this life.

The architect’s rendering of the Crystal Theatre in Boxoffice of November 14, 1936, mentioned in my earlier comment, can be seen at this link.

Correction: The Maya Cinemas that replaced the Crystal is 14 not 16 screens.