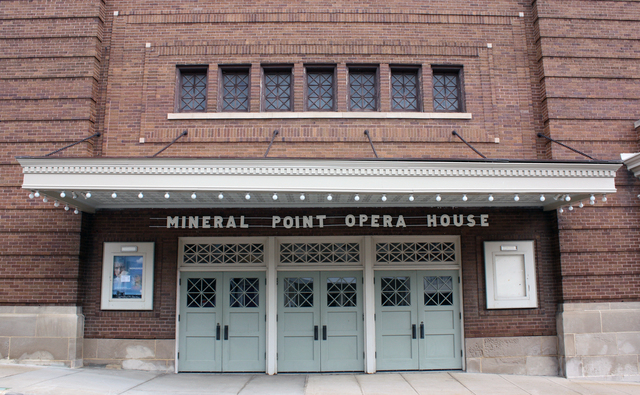 Small town theatre built in 1914 as a vaudeville and performing arts house. It opened as the Municipal Theatre on February 9, 1915 with the play “The Misleading Lady”. In later years it strictly showed movies. In 1936 it was renamed Point Theatre. Extensively restored and reopened in 2003, it now serves as an anchor for the picturesque shops and businesses in a former lead mining town, founded by Cornish miners.

According to the Mineral Point Chamber of Commerce, this theater did indeed go by the name of Point until the early 1990s. Here’s a little more detail about its early years and restoration.

“Like most communities, many professional entertainment and touring show groups played Mineral Point, along with local theatrical productions. Many of these productions were held at local public halls and probably at the Opera Hall in the old courthouse. As early as 1889, the local newspapers began urging the City of Mineral Point to build a new opera house. There were finally successful when an Opera House was included in the plans for the new Municipal Building. In February 1915, the town dedicated the new Opera House in the the new City Hall (137 High Street). The new Opera House contained boxes holding twenty seats, and a main floor and balcony which seated 703. A stage and screen, protected by an asbestos curtain, extended across the back of the building. It had steam heat and electric lights. In 1963, residents restored the interior of the building and repaired the interior filigree detailing with original molds found in Milwaukee by Robert Neal. In 1988, the city began planning restoration of the theater.”

The Mineral Point Opera House Rehabilitation Project is seeking bids by April 7 on one complete contract for the work.

The owner of record is Lauren Powers, Mineral Point.

The Architect will be Strang Inc. of Madison, Wisconsin.

In general, the project consists of rehabilitation work on the existing theater to include some exterior restoration and repair. The approximate area of work is 7,470 square feet on two floors and a mezzanine.

Here’s a recent article about the renovation with some pictures.

We’ve been “re” opened for two years now. Restoration was a total success. Please check out our website at www.mpoh.org for updates and info. We will be hosting the Driftless Film Festival in November for the third year. I’m happy to discuss restoration with any interested party, just gave three tours today. We’ve been known as the Municipal Theater, the Point Theater and now the Opera House.

It is so nice to see the Opera House restoration. I remember my father taking me as a little boy to a special Halloween weekend matinee for kids. There were cartoons and I think some movie shorts, treats handed out etc. Gosh, probably 60 years ago.

In May of 1913, the Mineral Point City Council hired Claude and Stark of Madison to draw plans for a new city building containing a city-run theater. The 725-seat, Municipal Theatre opened February 9, 1915 serving as its opera house with a play called, “The Misleading Lady.” But on June 10, 1915, the new World Theatre seemed to get more town attention showing four reels of silent movies. The city booked a traveling show of “Birth of a Nation” complete with live musicians from February 3-5, 1916 finding a new path towards self-sufficiency through motion pictures.

A.P. Desormeaux and “Rube” Fessenden took over the operation in November of 1928 to convert the silent house to talkies on a 15-year leasing agreement. In early 1929, the installed Moviephone equipment. In 1930, Desormeaux took on the World Theatre which had also wired for sound as well. He would remodel the Municipal in 1932 and sell the World Theatre to Waldemar Amusements Co.

In 1936, the Municipal became the Point Theatre and under new operator H. M. Schumacher received new seating. The World had ended its run making the Point the town’s cinema destination. In 1943, the theatre was modernized under new operators on a 20-year leasing agreement. The theatre went widescreen in the 1950s. In 1963, Mr. and Mrs. Frank Lesmeister led a community effort to both modernize and restore the theatre partially to its earlier days. 25 years later, the City took over the restoration of the Point in 1988 as it became the Opera House.