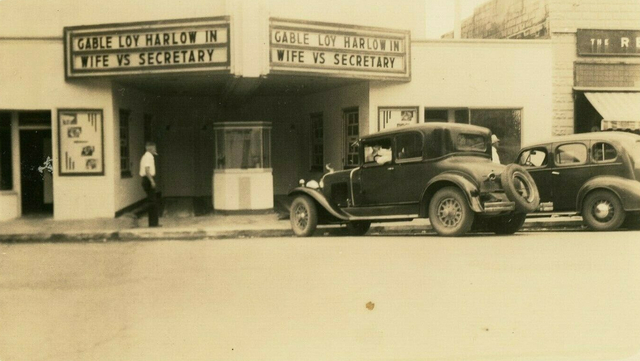 The Town Hall Association was organized in 1914, when the people of Fall River Mills first felt the need of having a community center. The committee, with the cooperation of the townspeople, was able to build a town hall and throughout the years it was in use, the various clubs and other townspeople contributed to maintain it in good order.

The first motion pictures to be shown in the hall were brought in once a week by E. B. Byard, who also was the first to bring sound pictures to Fall River Mills. He had portable equipment and visited each town once a week.

On May 7, 1940, the building was razed by fire. Soon after the fire, the people of Fall River again realized they needed a new town hall and the committee again commenced working to provide ways and means of erecting another hall. In the fall of 1940 the architects submitted the plans for the new building and construction started soon after the new year. The new hall opened June 27, 1941.

There were two shows each evening, at 7:00 and 9:00 p.m. There was a Sunday matinee at 2:00 p.m. Ticket prices were ten cents for children, 26 cents for students, and forty cents for adults. The loge seats were 45 cents. There was a Federal defense tax on student and adult tickets, which was extra.

At some point, the Town Hall Theatre became the Paramount Theatre, owned by Paramount Pictures. The name was again changed to the Fall River Theatre after Paramount was forced to sell their stake in movie theatres.

Another fire swept through the building in the late 60s, but the theatre survived this second fire. Remnants of that fire can be seen on some areas of the hardwood floors in the auditorium, in the crawl space between the basement and the auditorium and in the attic.

The old leaky, rusty metal roof was replaced in August 2006, and in September 2006, a new heater and much needed air conditioning was installed. A new marquee is on the wish list.

*Historical information was derived from a souvenir program of The New Town Hall Theatre, dated June 27, 1941.

Still in business and soon converting to digital projection.

Awesome! That theater is still on my “to shoot” list.