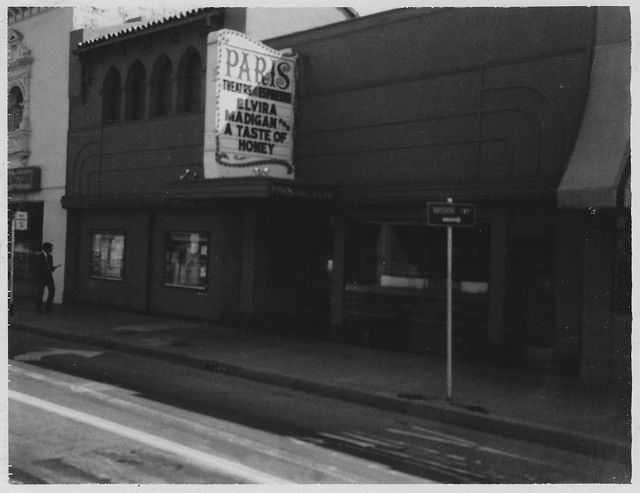 This theatre was located at the beginning of University Avenue down the street from the Stanford Theatre. The Paris Theatre was opened in 1945. On July 27, 1961 it reopened as the Paris Theatre Espresso which had its own coffee bar. The reopening movie was Jean Renoir’s “Picnic on the Grass” (Le Dejeuner sur l'herbe). In later years it was run as an adult theatre by San Carlos Cinemas, which ran the Laurel, San Carlos, Palm, and San Mateo Theatres.

When this theater opened, Boxoffice Magazine’s headline writer apparently conflated the location of the theater with the town its owners lived in. Under the headline “Opens Redwood City Paris” in their August 21, 1961, issue is a brief item saying that Jean Renoir’s “Picnic On the Grass” had been the opening attraction at the new “…Paris Theatre and espresso house….” The owners were named as Mr. and Mrs. Harold Snyder, of Redwood City.

The introduction on this page should be updated to include the information about its early years I noted in my earlier comment.