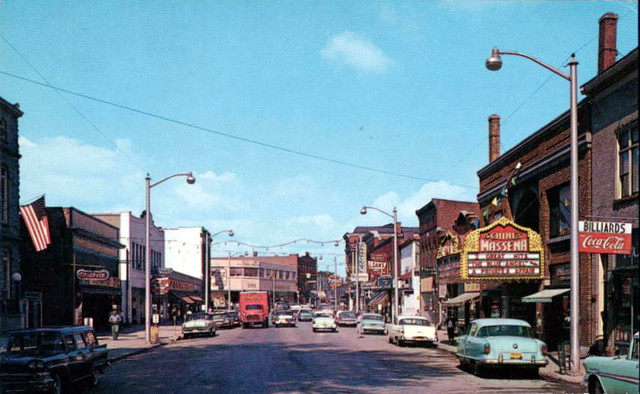 The Strand Theatre Theatre was opened between 1914 and 1918. It was taken over by the Schine Circuit in 1931 and they remodelled it as a Spanish Atmospheric style, designed by architect Peter M. Hulsken. Seating was provided for 1,500. It was reopened as Schine’s Massena Theatre on August 20, 1931 with Will Rogers in “Young As You Feel”. It was closed in 1992 with “The Hand That Rocks the Cradle”.

In 2014 there were proposals to renovate and reopen the theatre for, live bands, movies and meetings.

There are several views of the theater on this site:
http://tinyurl.com/ysrd4s

I have a post card of this photo I obtained in the late ‘60’s. One movie on the marquee is the 1959 film “The Blue Angel” starring the blond beauty may Britt , once married to Sammy Davis Jr. Like a ring with it’s gem stone sparkling, the brightly lit marquees that once dotted our downtowns are becoming scarce to find. Massena was a bustling village in the midst of the Seaway and power project at the time of this photo. Ray. CharlotteNC. (formerly Winthrop, NY)

I believe the MASSENA Theatre had earlier been the STRAND Theatre. Check photos …

The location of the Massena Theatre is wrong on the Google map. On the satellite map, it looks like the theater still exists. It is located on Main Street, between W/E Orvis Street and Andrews/Phillips Street.

If you click on the above Google Map, you can see the Massena Theatre. It looks good. The framework of the marquee is still in place. The image is dated November 2008.

This theatre opened somewhere between 1914-18 and was remodelled as an atmospheric by architect Peter Hulsken in 1931.

A user on a Massena forum said that the last movie shown was The Hand That Rocks the Cradle, so the closing was probably sometime in 1992. Another forum user mentioned a fire which destroyed the curtains and did other damage. This was after the theater had been closed.

I’ve found the Strand mentioned in the trade journals as early as January, 1921. It was operated by Mr. V. A. Warren, who in 1917 had operated a house in Massena called the Star Theatre. The Schine circuit took over the Strand in 1931 and reopened it as the Massena Theatre in August that year after extensive remodeling.

The Massena Theatre was at 65 Main Street. The building has lost its marquee and looks a bit worse for wear, but is still standing, with the storefronts adjacent to the theater entrance still in use.

The Schine’s Massena as of January 2014 was called essential to the downtown revitalization. The Marquee was restored and in storage as were the seats. It was to be used for meetings, live bands and of course movies. The stage area is small with no backstage area. The building is reported to be in sound condition. The interior was in poor condition. An LLC , the Massena Arts and Theater Association was in charge of the project. I’m speaking in past tense only because I don’t live here now and have no current info.