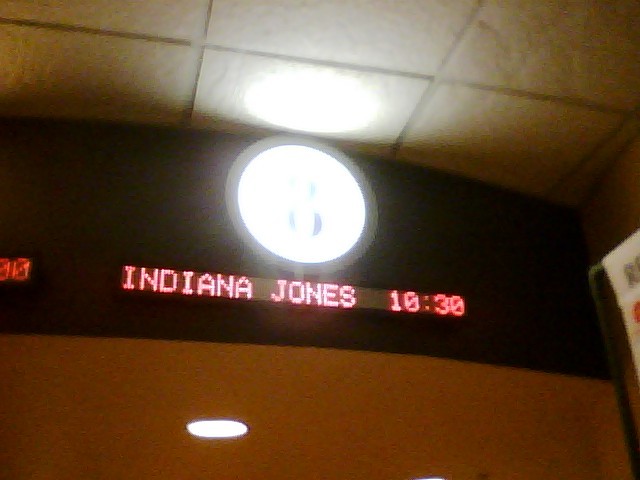 18 theatres with stadium seating (with 18-inch risers for unobstructed viewing).

— AMC’s exclusive LoveSeat-style seating featuring an extra six inches of leg room and armrests that lift up so viewers can “cozy up.”

— Digital sound in all auditoriums.

— AMC’s signature “fast and friendly” service throughout the theatre.

The officer of a firm responsible for day-to-day management, usually the president or an executive vice-president. of American Multi-Cinema, Inc. “The AMC brand means an inviting atmosphere, industry-leading amenities, and the highest quality film presentation, and it’s a great fit with the exciting and unique shopping and leisure environment at Discover Mills.”

This opened on December 17th, 2003. Ad in photo section and below During 2006, this place had a pathetic excuse for a projectionist(s). Three times I received prints from them that did not go back through the film exchange but instead were picked up by courier after midnight on Thursday and delivered directly to the theater where I was working on Friday afternoon. The first two times the prints arrived with the reels filled to the edge and cut, never at the proper places. One time the leaders and tails were just crammed into the can and a second time they did not even bother to include them.

The third time the print was Dreamgirls and that one was unbuildable. Apparently they had lost or broken one of the shipping reels and overloaded 2 of the reels they had, slid the excess off of the reels so the would fit in the can and them crammed the rest onto the can and forced the lid shut. The exchange did not have another print, only 5 good reels of a print that had been returned with the rest if the reels damaged. We took those and I managed to piece one print together although the running time was 8 minutes short.

We called them and asked that they check their garbage and try to retrieve the missing footage. The liars denied that they had shipped a print out in that condition and even denied that they had shipped a Dreamgirls print out at all. This despite the fact that the cans still had the Discover Mills shipping labels on them, the courier receipt showed it being picked up there shortly after midnight that day, and the AMC Coming Attractions, Feature Presentation strips, and the on screen ads with Discover Mills on them were still attached to the front or reel one along with the previews.

I had to fill out a damaged film report to account for the second print and to make sure we did not get the blame. I am sure nothing happened since the big three of AMC, Regal, and Carmike never got charged for tearing up a print no matter how many times it happened, which was often. I have lots of stories about getting bad prints, more involving AMC than any other company.

And we wonder why everything went digital.

Yes Mark, even with the easier shipping, sharper picture, crisper sound, and greater flexibility, I am sure the overriding factor that convinced the theater companies to spend 75 to 100k per screen was to finally get rid of that pesky projectionist. I mean the invention of digital projection was even better than the Christie endless loop platter. And I am being only slightly sarcastic here.

While those of us who managed to hold on to the end lost our jobs, I am sure the boys at Discover Mills did alright. After all, they need Coke pumpers everywhere.

StanMalone, I lasted in an independent 10 plex until mid May 2013. Im in my 43rd year now. House projectionist at an arts center that runs 35MM once a month. And I run 70MM for the special movies (H8, Dunkirk etc) in NYC at 2 theatres and 1 in North Jersey. But it does sadden me how prints were treated in those final years. I received quite a few in the same manner you did.

This has been renamed the Sugarloaf Mills 18 in 2014 after the mall changed its name.