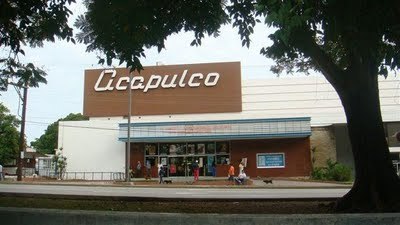 The Cine Acapulco is located in the Alturas del Vedado district of Havana on Avenida 26 between Calle 35 & 37.

Opened in 1958, it has a 1950’s ‘contemporary’ style, with ornamental wood panelling and a huge wall-covering mirror in the foyer.

The Acapulco was the last luxury movie theater opened in Havana in middle 1958. It was operated by the Carrera chain of theaters that included the Payret, Los Angeles, Monaco and a few others. It was a first run theater with a beautiful moderne interior. It should be noted that no more cinemas have been built in Havana since 1959, and that more than half of the 200 existing ones are shuttered or destroyed.

The theater is erroneously positioned in El Cerro on the street map, it was located on 26 Street between 35 and 37 Streets in Alturas del Vedado, its address was Avenida 26 #3500.