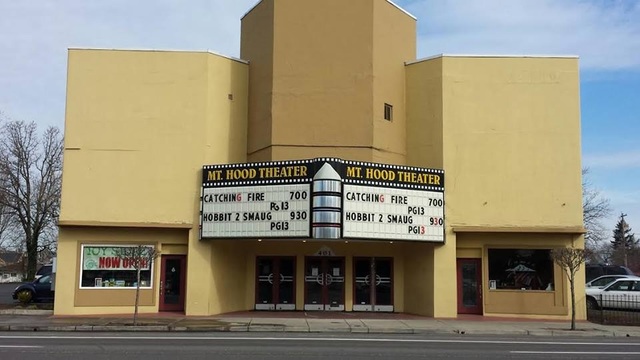 I know very little about the Mount Hood Theatre. I know it is four dollars to get in and you get to stay for both movies and I know its the biggest capacity theatre I have been to. I believe there are around 800 seats.

It was purchased by new owners in May 1999 and since then improvements have been made, including new carpet, new sound system, new marquee etc.

It’s a fun place to go and watch a movie with the family. They have good prices on the popcorn and drinks,and it seems to taste a lot better than those first run houses.It is a good sized movie house and they recently had installed a new air conditioning system, felt great on those hot summer nights.Two movies one small price.

The Mt. Hood Theatre was probably designed by Portland architect James W. DeYoung. Here’s an item datelined Gresham, from Boxoffice, July 24, 1948:[quote]“H.H. Moyer, owner of the only theatre here, has announced plans to build a $100,000 theatre. Mayer said contracts had already been let to Ronald Hasselman, local contractor, to handle the construction job.

Plans for the 60x140-foot building were drawn up by J.W. DeYoung, Portland architect. Mayer said the main auditorium would seat 500 persons and the loge section 375. He said plans call for two cry rooms, one on either side of the projection booth.“[/quote]The Mt. Hood must be either the theater that was being built in 1948, or the one that Moyer was already operating, and from the look of the Mt. Hood’s building I’d say it was probably the 1948 theater designed by DeYoung.

DeYoung also designed the Tigard Theatre, at Tigard, Oregon, in 1940; The Longview Theatre at Longview, Washington, in 1941; and the McKenzie Theatre at Springfield, Oregon, opened in 1946.