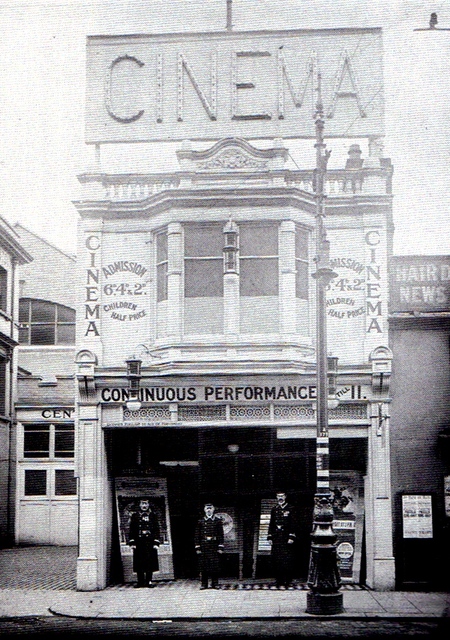 Originally built as a roller-skating rink in 1909, it was in occasional use as an ‘electric cinema’ in early 1910. It converted into a full time cinema from 7th March 1911 and was controlled by the Andrews family. The hall could seat 1,500 which included some seating in a small balcony.

The hall was entered from a narrow frontage which replaced a small shop and for most of its life provided competitively priced entertainment, usually double-features from distributors back-catalogue in a simply furnished and decorated environment.

Archives have preserved records of the Andrews company. While seating and decoration remained very basic, the Central Cinema was well equipped. In later years it boasted one of the largest CinemaScope screens in the City but disaster struck in the summer of 1958 when a nearby building caught fire and spread to part of the Central.

Immediate steps were taken to organise repairs and on re-opening the Central advertised the latest projection system, understood to be from Kalee. Within a year the Central closed and when demolished in 1961 it revealed the wooden skating floor was still there. Replaced by shops and offices no trace remains, indeed the shops have themselves been demolished to be replaced by, yes, new shops.

The vaults were accessed for delivery purposes via an entrance located in the lane between the Greyfriars building and Queen Street.The surface delivery area consisted of a loading bay into which one van could half reverse into at a time.At the back of the loading bay was a very heavy duty lift which was used to take the film containers down into the extensive and heavily fireproofed vaults.I very much doubt if the underground area could have been converted into a parking area as the required ramp would have been almost impossible to construct.Films were core spooled in reels of 2000 feet contained in a can. The cans were then placed in steel containers. The largest containers holding six cans were extremely difficult to carry. Only the news reels were packed in cardboard boxes. Balancers came in either two can cases or as single reels in a can which was contained in a ply case. I have put some memories of the vaults onto the listing of the Electric Cinema that formerly stood on the Dominions Arcade site.

According to some of my ex cinema colleagues there are actually seven former suburban cinema buildings surviving (in varied use) in Cardiff. These being :The Splott, Tivoli, Avenue, Ninian, Clifton , Gaiety and Canton.

I had forgotten to count the Clifton, as it closed in 1932 and wasn’t ever a Jackson Withers cinema!( In fact it was a cinema for about 17 years and Woolworths for over 70!) My point was that the city centre cinema buildings have all been totally demolished, while some earlier buildings that became cinemas have survived.The suburban buildings have often found new uses,e.g. the Canton closed 49 years ago and has been a retail unit longer than it was a cinema, even though one of the many built by 1914. In the opposite direction a school that became an arts centre nearby has thrived for approaching 40 years and has two cinemas.Apart from a few photos,perhaps some plans, nothing’s left of many cinemas.

Today I found out how to use Google Earth street View. I looked for the Dominion Arcade film vault’s entrance and actually found it in a street view of Crockherbtown Lane. The entrance is now at the end of very short blind alley. However you can clearly read the words Dominion Arcade and the date.

My Grandmother was manager at the Central for many years. She was well appreciated for getting on well with the local population. At her funeral aged 90 we were all stunned at the arrival of a chauffeur driven Rolls-Royce from which alighted a dapper little old man who sat at the rear of the chapel and said nothing. An Andrews? Who knows? A story fit for the screen?

Hi everyone, I’m a history graduate doing my dissertation on the influence of Disney’s productions on the British public and possibly its influence on the British Film Industry. I was wondering if anyone new of anyone that worked at any of the cinemas in Cardiff or anywhere in Wales that can remember any Disney’s productions being shown.Or anyone who visited the cinema that saw one of the earlier productions, e.g. any of the Mickey Mouse cartoons, Snow white and the Seven dwarfs, Bambi.. etc. Also anyone know of any surviving family members that owned cinemas, and could someone please point out where I could access these Archives preserved from the Andrews Company I would be very grateful for any help. Thank You!

The very extensive collection of papers from the various businesses owned by S. Andrews may be found at the Glamorgan Archive. They owned several cinemas in South Wales. RhianDavies91 may also find that,in days gone by, Disney films were generally shown first at Rank (Odeon etc) cinemas in Cardiff and were often withdrawn from distribution after a time until being re-released years later.

To geoffjc thank you for your help, I was wondering if there was the slightest chance that you, or anyone else on here reading this new of anyone that went to see a Disney film in a cinema during the second world war or just after? I know its a long shot but thought its worth a try!

I went to see Bambi showing at the Regent Cinema in Ely in about 1944, i can still remember crying when Bambis' mother died.

The Dominions Arcade,once home to film distributors,with their vaults below, now contains the entrance to a hotel constructed in the block of small offices, (a few occupied by the smaller film renters), originally built above it in 1921, on a site partly used for the short-lived “Electric Theatre” until 1915

Among the papers deposited in the archive are plans showing a planned reconstruction of the Central cinema in the 1950’s which was never carried out.