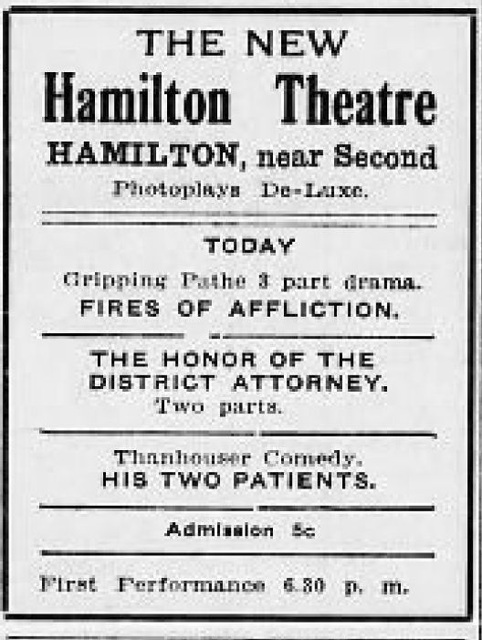 Originally opened in 1915 as a 500-seat movie theatre, the Hamilton Theatre was badly damaged by a fire on October 12, 1938. In 1939 plans were drawn by architect William H. Lee to rebuild the theatre, but were never carried through.

The October 23, 1915, issue of Motography had this item about the opening of the Hamilton Theatre in Allentown:

“After weeks of preparation on the part of the decorators and electricians, the new Hamilton theater, located on Hamilton street, near Second, Allentown, has been opened. The theater, which will be devoted to the exclusive showing of feature photoplays, is one of the prettiest in the city. It has a seating capacity of 500 people and is constructed along strictly fire-proof lines. Herbert M. Meeker is manager.”

Appears to have closed for good on October 12, 1938 after a damaging fire and sat boarded up with a sign reading, “Closed for alterations; look for reopening soon” for five years according to the local newspaper. The operators of the Earle had bought the Hamilton in 1938 and while I don’t doubt that architect William H. Lee drew up plans to revive the Hamilton, there don’t appear to be any bookings there. There are ads mentioning the Hamilton but telling patrons to visit the Earle. Finally, in 1945, the theatre was targeted for new usage (an auto repair facility). The building would eventually be razed.