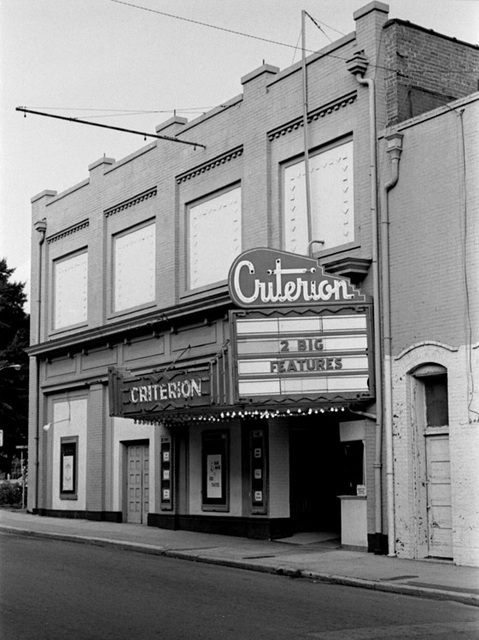 The Criterion Theatre opened on June 10, 1932 with Joe E. Brown in “Broad Minded”. It was operated by Carver Theatres. In 1940, B & L Enterprises took over, and they operated the theatre until 1950. From 1950 to 1975 it was operated by Charlotte based Consolidated Theatres.

Most of the movies screened at the Criterion Theatre were basic ‘B’ movie crowd pleaser films, with double feature programs. The policy changed in the late-1960’s and into the early-1970’s, when the Criterion Theatre began showing adult films along with blaxploitation films, and this continued until its closing in 1975.

By the following year, the Criterion Theatre had been demolished to make room for the construction of the Durham County Judicial Building that opened on the site in 1978

The Criterion Theatre was demolished in the mid-1970’s to make way for a parking lot and a nearby building. The offices of the Durham County Judicial Building and Courthouse is where the Criterion Theatre once stood in Downtown Durham at the Corner of Parrish Street and Church Street.

FYI:
The Rialto and The Criterion were demolished in the mid-1970’s to make way for a parking lot and nearby office buildings. The offices of the Durham County Judicial Building and Courthouse and the Durham County Sheriff’s Department was constructed in the mid-1970’s and it officially open to the public in 1978 where the two theatres once stood right around the corner from each other in Downtown Durham where the intersections of East Main Street,Church Street,and East Parrish Street stand.

Located less than a block from the Trinity United Methodist church (which sits on the highest point inside the Loop), the Criterion was, in its later years, a skin-flick movie house. The City of Durham purchased the theatre and the adjacent property in 1963, causing some eyebrows to raise. When asked about the leasing arrangement with the theatre operator, then Mayor Wense Grabarek sanguinely replied that movies are viewed â€œwith different levels of acceptabilityâ€ (quoted in Morning Herald article of July 9, 1970).

Durhamite Howard Margolis recalled the 1957 showing of And God created Woman, featuring a young Brigitte Bardot and her bared breasts. Ticket reservations were quickly sold and the theater was packed tighter than if a Duke-Carolina basketball game had been scheduled.

The Criterion, or the â€œCritâ€ as it was known, had a less sullied reputation early in its life, when musicals were performed there. Still, it was well-known later for the X-rated films. In particular, visiting conventioneers used to find entertainment at the Crit. The 1970 management spokesman said, â€œWe know theyâ€Ÿre conventioneers because they still have the cards on their lapels. We have more convention people than any other theater because more people are downtown and can just walk around the block.â€

Durhamites had other movie-going options nearby, though, if a show like this was sold out: the Rialto was around the corner to the left (at 219 E Main) and the Uptown was around the corner to the right (at 121 E Main). None of these structures remains today. When the Criterion closed its doors in 1975, the last remaining place to see a movie in downtown Durham was the Carolina Theatre. That is still true today, over thirty years later.

What became of the Crit? She was taken by Urban Renewal when the City of Durham decided that they need more downtown parking near the government offices and agencies.

Andrew:
You’re correct. At one time,there were at least seven moviehouses located in the vicinity of Downtown Durham which were: The Uptown, The Carolina, The Rialto, also
The Center, The Wonderland, The Arcade,and The Criterion. By 1965,three of its movie theatres Downtown Durham would suddenly vanished forever.
The Center(East Chapel Hill Street)closed its doors at moved to the suburbs by November,1966(to Lakewood Shopping Center)and was demolished to make way for the Mutual Savings and Loan building,leaving the Rialto,the Carolina,and the Criterion as the only three operating moviehouses located Downtown. By 1966,the Uptown,the Wonderland,and the Arcade were gone. By 1970,the Rialto closed its doors forever,leaving the Criterion and the Carolina as the only two operating movie theatres Downtown. All that was about to change by 1975 when the Criterion Theatre closed,leaving the Carolina Theatre as the last remaining place to see a movie in Downtown Durham(which is to this day still operational). All of the adult films and “B” movie pictures by 1975 either ended up playing at the Carolina Theatre downtown or you had to go to the northern edge of the city to see them(The Riverview Cinema in North Durham,which is posted on this cinema treasures site),and other movie houses in Durham.