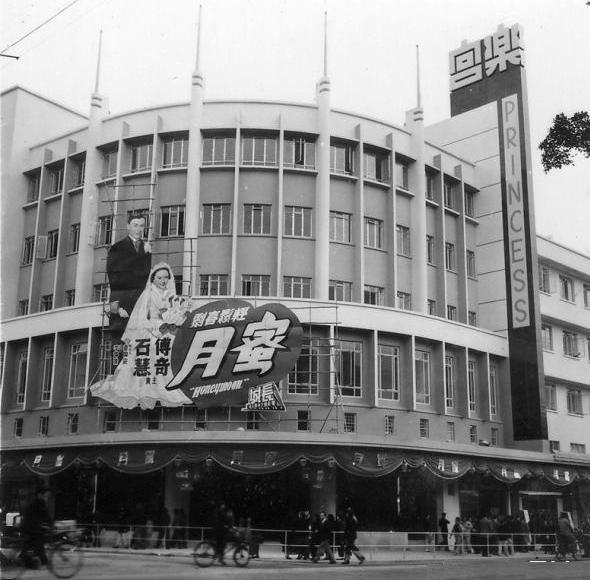 The Princess Theatre was situated in the Tsim Sha Tsui district on the Kowloon side of Hong Kong.

An opening advertisement of the theatre published by the China Mail on 8th December,1952 boasted:

It opened to business on 10th December, 1952 with “Rainbow ‘Round My Shoulder” and showed first-run English language films until 1970.

The theatre was built and run by the Hong Kong and Kowloon Entertainment Company, a company run by the family of Sir Hotung. Sir Hotung was a famous businessman and philanthropist of Hong Kong in the last century.

The theatre building had shops, offices and a restaurant in the front part, while the well-designed auditorium had perfect sight lines in the rear. It was equipped with the latest film equipment of the early 1950’s.

On 9th June, 1964, The Beatles appeared at the theatre for two performances.
From 1960 until 1971, the anniversary celebrations of the Republic of China were held at the theatre.

On 3rd October 1970, the theatre building was sold to a hotel group of Hong Kong. From 1971 until its closure on 23rd March, 1973, it was a venue for Mandarin variety shows and musicals. Selected films of English and Mandarin language were also shown.

A hotel was built on the site of the theatre.

The Princess Theatre was indeed the most famous and luxurious theatre in the 1950s. It was located on the east side of Nathan Road and several blocks south of Jordan Road. The movie “The Ten Commandments” and others of biblical stories were shown there. Us students went there in big groups and our teachers (Catholic brothers) were also there making sure we behave.

I remember going there to see Hitchcock’s Psycho. The hype then was that nobody would be admitted into the theatre after the film starts.
Didn’t know what the fuss was all about, and a bit disappointed to see a black and white film when 99% of the new releases were in colour.
There is an old picture of the theatre in Flickr:
View link

The theatre from a different angle:
View link

The installation of new panoramic giant sized screen was completed on 26th March, 1954 with the showing of “ Flight ot Tangier.”

Here is a great picture of Princess Theatre:
View link
The Artdeco style curved facade can be clearly seen.

That is a great photo.

Another good catch from flickr.
View link
including a ticket for the one and only Beatles’s gig in Hong Kong.