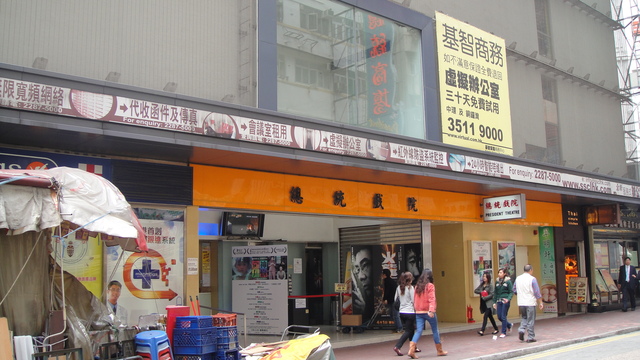 The President Theatre is situated in the Causeway Bay district on the Hong Kong Island.

It opened to business on 26th October, 1966 with “Lost Command”. Its 1,350-seat auditorium was on the first floor of the theatre building, and the spacious lobby on the ground floor. The auditorium had perfect sight lines, and the width of the screen was sixty feet.

It showed first-run English and Chinese dialect movies until it was rebuilt in the early-2000’s.

The rebuilt President Theatre with two screens opened on 21st May, 2003. The auditoriums and lobby are on the second floor, while the ticket booth on the ground floor. The new theatre building has shops on the ground floor and a restaurant on the first floor.

Could President be the oldest cinema still in business in Hong Kong?

The Yuen Long Theatre in Yuen Long in the N.T.is the oldest theatre still in business in Hong kong.