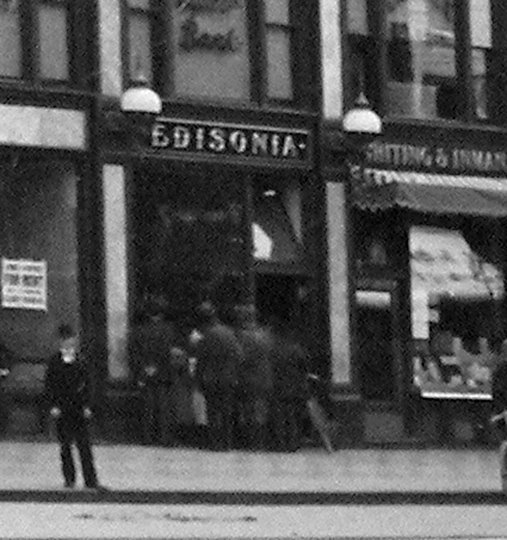 NOTE: The previous Edisonia Hall (1894-1896) moved to the Ellicott Square Building in 1896, at which time it changed its name. This is where the Buffalonians allegedly saw their first motion picture, “Miss Jerry”. This basement room was run by Mitchell and Moe Mark as a “phonograph parlor” and a kind of a museum of electrical curiosities including the X-ray machine, cameras, phonographs, and now the kinetoscope.

IS THIS THE WORLD’S FIRST PERMANENT MOVIE THEATER?

According to Terry Ramseye in his book A Million and One Nights, this is arguably one of the first, permanent motion picture exhibitions in the world.

The only earlier claim is a “theatre” in New Orleans converted from a vacant building with chairs added in May 1896.

The distinction is that Vitascope Hall was constructed from scratch with no other purpose than to show motion pictures. So far, no other theater has been discovered which can make that claim.

As of August, 2007, the approximate location of the theater within the Ellicott Square Building has been located. The entrance to the Edisonia Hall survives in a photograph which is now posted on the Buffalo International Film Festival Website and on Wikipedia.

The theater was open six days a week until November 1897 when it was opened seven days a week. Shows were presented on the hour from 10:30 in the morning until 11:30 at night.

Between the opening of the theater on October 19, 1896 and November 1897, Mitchell Mark claimed that 200,000 people had visited the theater! This is substantially more than the population of the entire Western New York Region.

Vitascope Hall is also referred to as The Vitascope Theater.

An opening day (October 19, 1896) advertisement refers to it as “The Electric Theater.”

The following story appeared on the front page of The Buffalo News on Sunday morning, October 25, 2007.

The first public movie theater? Yeah, it was probably in Buffalo

Buffalo lays claim to the air conditioner, grain elevator, windshield wiper and pacemaker. It may be time to add another: The first motion picture theater.

â€œThis is one of those very hazy areas of theater history. Really, no one can say with any certainty what was the very first purpose-built movie theater,â€ said Karen Colizzi Noonan, president of the Theatre Historical Society in Elmhurst, Ill., which records and preserves the history of Americaâ€™s theaters.

â€œGiven the date, it is more than probable that this one was the first in the U.S. We have no evidence of any earlier movie theater.â€

â€œIt was incredibly early for someone to have the idea of a stand-alone piece of entertainment, but there it is in the paper,â€ Morrison said, referring to newspaper clippings at the time.

The research is the result of efforts by local movie buffs, including Edward Summer, president of Buffalo International Film Festival, and Ranjit Sandhu, a former Buffalonian and author of the forthcoming book, â€œBuffalo: The Birthplace of the Movie Theater.â€

The rediscovery of Vitascope Hall also underscores the more than a dozen early movie theaters from Buffaloâ€™s past that still remain. Only Sheaâ€™s Performing Arts Center, the 1926 movie palace, is still a theater.

â€œYou have such an opportunity to say movie theaters as we know them really were born in Buffalo, and to then be able to point to a handful of them, still standing, and hopefully one day restored,â€ Sabin said.

Summer recently found evidence of Vitascope Hall in a scrapbook belonging to the buildingâ€™s owner, developer Carl Paladino. A photo of the building with the Edisonia entrance also hung on the wall.

The theater is believed to have been located in whatâ€™s now a carpenterâ€™s shop under Crinzi & Gullo Jewelers reachable by a spiral staircase.

Paladino said there are plans to install a window display in the buildingâ€™s atrium commemorating the Mark brothers and their groundbreaking theater, with artifacts and possibly a computer-aided diagram of what the theater looked like. He also wants to erect a plaque outside the building.

â€œIt was pretty cool finding out,â€ Paladino said. â€œI thought [Summer] was nuts when he first came in, but when we went through the old scrapbooks he found the picture of the theater, and articles from that era.â€

The Vitascope, an early film projector, made its debut in April 1894 at the Cotton States Exposition in Atlanta.

The inventors had a falling out, and sold the rights to Edison, who insisted on being credited with the invention and that it be renamed the â€œVitascope.â€ Its first commercial screening was in April 1896.

The short films, often under a minute long, were shown mainly as traveling-show novelties or add-on attractions at vaudeville theaters before Vitascope Hall opened.

The Mark brothers had grown up in Richmond, Va., and were haberdashers before getting into the theater business. With Rudolph Wagner, a former Edison employee, they opened Edisonia Phonograph Parlor and hired an architect and designer for Vitascope Hall.

â€œThey built a beautiful theater exclusively for the purpose of showing motion pictures. That had never existed before,â€ Summer said.

One month after the Vitascope was introduced, a New Orleans entrepreneur rented a store, painted the windows black, hung a sheet, laid out chairs and ran movies for a short period. A theater opened in Toronto the same year. But the Vitascope appears to have been the first space constructed to be a movie theater.

The first 12 months were a banner year for Vitascope Hall, according to a Buffalo Express article in which Mitchell Mark claimed some 200,000 ticketbuyers had attended the small theater. He announced it was going to be open seven days a week to meet the demand.

With just 72 seats, that would have required almost 2,800 sell-outs, but the continuous operation and short running times of the programs â€" each package of films lasted under an hour â€" made it possible.

Hereâ€™s what the Illustrated Buffalo Express wrote about Vitascope Hall, also referred to at the time as the Vitascope Theatre and the Electric Theatre, on Oct. 18, 1896:

â€œThereâ€™s a theater in Ellicott Square now â€" a new Bijou theater, beautifully decorated in white and gold, with an inclined floor carpeted in Wilton velvet, nine rows of luxurious orchestra chairs arranged in sets of four on either side of the central aisle â€" 72 in all â€" a handsome stage with an elaborate proscenium arch, lavishly carved and daintily decorated, rich maroon plush hangings, incandescent electric lights flooding the place with radiance, perfect ventilation …â€
The cost of admission was 10 cents, and the films â€" American and French â€" changed Sundays and Thursdays.

â€œThis miniature theater is one of the prettiest places in Buffalo,â€ a press release printed in the Buffalo Express said in proclaiming the theaterâ€™s opening.

The Mark brothers went on to become movie theater impresarios, opening more and bigger theaters in Buffalo as projection technology improved. In 1914, they opened the first $1 million movie house, the Mark Strand Theater, on New Yorkâ€™s 47th Street and Broadway.

The Academy Awardsâ€™ Sabin was among 15 members of the Association of Moving Image Archivists who visited Buffalo on a daylong tour in September. They saw the 1910 Savoy Theatre, William and Krettner streets, the 1914 terra-cotta Sattler Theatre, 516 Broadway, and the former Regent Theater on 1365 Main St., also built by the Mark brothers and now Bethesda World Harvest Church. Sabin was blown away.

â€œAs someone living in the town that tore down [classic theaters], it just amazes me to see theaters from the early 1900s still standing in Buffalo,â€ Sabin said.

Sandhu has long marveled at the sheer number of early, hard-to-detect theaters in Buffalo, while at the same time lamenting their decline.

â€œThere are a lot of cities that may have had comparatively as many movie theaters as Buffalo did, but whatâ€™s amazing about Buffalo is that so much is still here. You can look at theaters from the turn of the century to the â€™30s that are still standing,â€ Sandhu said.

Buffaloâ€™s theater sleuths want the movie world to recognize the trail to Hollywood ran through Buffalo.

â€œIt is clear that Mitchell Mark of Buffalo, New York, was the great visionary of the future of the motion picture theater. He had this sparkling, clear picture in his mind of the potential of exhibiting movies in a beautiful place that would draw huge numbers of people in a way that was undreamed of, and the facts bear that out,â€ Summer said.

â€œThe vision of the movie theater as an extraordinary and special place came from that Vitascope theater in Ellicott Square.â€

113th Birthday Party held on Sunday, October 18, 2009 from 3-5pm in the atrium of Ellicott Square Building. After a brief history of the Vitascope Theater was given by Edward Summer, President of Buffalo International Film Festival, “The Living Nickelodeon” was performed live by Rick Altman. This wonderful presentation gives the history of early film from the late 1890s to about 1913 when “sing along slide shows” were largely discontinued.

This was an official event of Buffalo Film Festival 2009 and Doors Open Niagara 2009.

Birthday cake was served. It was chocolate with strawberry filling.

Some sensed the spirits of Mitchel and Moe Mark on the premises. Others thought it was the two cats that live in the space formerly occupied by the theater.

Mitch and Moe Mark were active as film exhibition pioneers in the Boston area in the post-1900 era. They opened the Theatre Comique in Scollay Square, Boston in August 1906, the first purpose-built cinema in downtown Boston. They were also involved with other venues in the area. I had heard that they were from Lynn MA (north of Boston), but although they may have lived in Lynn briefly while opening a movie show there, they really were out-of-towners. They were also affiliated with Joe & Max Levinson, another pair of film-exhibition brothers.

Got to be one of the first theatres if not the first,very interesting.

The National Preservation Conference is being held in Buffalo this week and one of the events is on Saturday, October 22 from 1-2 at the Ellicott Building. It’s a Vitascope Theater 115th Birthday Party. It is free with a reservation or conference badge.