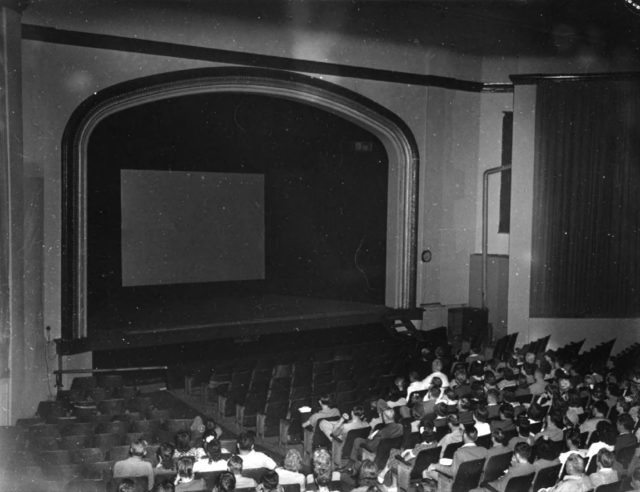 The Park Theatre was opened in 1928 as a vaudeville/movie theatre. During the 1940’s it is listed as being operated by Paramount Pictures Inc. through their subsidiary E.J. Sparks. By the early 50s, it is shown as being part of the Wometco chain.

Since 1962 it has been taken over by the University of Tampa as a live performance facility.

The description of this undated photo reads: “Auditorium at the University of Tampa.” This is almost certainly the auditorium of the David Falk Memorial Theatre when it was known as the Park Theatre. The absence of a CinemaScope screen probably dates this in the 1940s or early 1950s.
View link

Here are my pictures from November 2010.

Nice photos..thanks Andy. Would have loved to have gone to The Park in it’s heyday. I wonder if the booth is still equipped for 35mm and if the university ever runs movies here.

A recent article about this theater with a picture from 1963, a year after it was taken over by the University of Tampa and renamed:View link.

The theater was renovated to show Windjammer as a roadshow competing with the Cinerama equipped Palace theater located five minutes and across the river.

RRF: Thanks for this info. This is very interesting. I had no idea the Park had ever been renovated to compete with the Palace. I didn’t think the Park was large enough for the 3-projector process but maybe it was. “Windjammer” was in presented in Cinemiracle, a process very similar to Cinerama. I’d like to find the ad for “Windjammer” when it played here which should mention if the film was presented in Cinemiracle.

“Windjammer” did in fact play at the Park Theatre in Cinemiracle. It premiered on December 25, 1959 and ran through February 7, 1960 for a total of 6 weeks and 2 days. It played as a roadshow attraction with two showings daily and reserved seating. Similar to Cinerama, the showings required 3 projectors, a stereophonic sound system, and a large wall-to-wall curved screen.

Cinemiracle did not compete with Cinerama at the nearby Palace Theatre. The Palace opened with Cinerama in April 1962. By this time the Park had closed as a commercial movie theatre and soon became the property of the University of Tampa.

Just posted some ads for the “Windjammer” opening under the photos tab.

In June of 1960 the Park had the exclusive Florida west coast showing of “Can-Can” in Todd-AO requiring the installation of 70mm projectors and a giant 60' by 30' screen. The film played for 10 weeks. Ad posted under the photos tab.