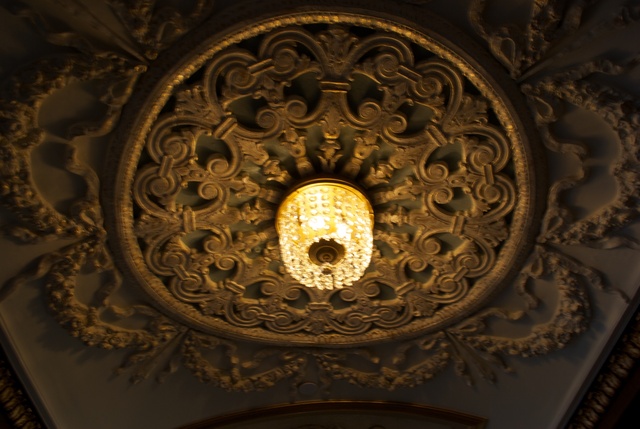 Opened as the Allen Theatre on December 31, 1919 with Mable Norman in “Upstairs”. The name changed to the Metropolitan Theatre and had its grand re-opening in 1923.

This theatre was the first in Winnipeg to be equipped with 70mm. A former Famous Players theatre, the Metropolitan Theatre closed on November 26, 1987, and remained shuttered for 25 years, 4 days!

An extensive $20-million, two years restoration project by the Canad Inns company was completed in 2012, and it was reopened on November 30, 2012 as the Metropolitan Entertainment Centre. Canad Inns are a locally owned and operated business. The building now houses a 200-seat high-end restaurant on the first and second floors at the front of the building, and the main auditorium serves as a special events and banquet hall. There is also a screen available on which to show classic movies and sports events.

I have copies of the origonal blue prints of the met. The prints are signed C Howard Crane hope this clears up any confusion

Canadian cities have had an extremely poor track record when it comes to saving beautiful old movie palaces and turning them in to live performance venues for concerts, Broadway shows, plays etc. Especially when compared to all the cities in the U.S. such as Los Angeles, San Francisco, Portland, Seattle, Chicago, Boston and especially Cleveland which managed to save 4 old palaces to form Playhouse Square. Here I can only think of the Royal in Victoria, the Orpheum in Vancouver, Canon in Toronto (formerlly Pangages/Impereial), the Elgin / Winter Garden in Toronto as well as the Imperial in Sarnia, Capitol in Windsor, the Capitol in Brantford. There may be others but at the same time we have lost so many including ones in Calgary, Edmonton, Montreal, Halifax and especially Hamilton and Ottawa which both had 2 glorious palaces lost to demolition…the Palace and cCapitlo in Hamilton and the Capitol and Regent in Ottawa.

Oh yes and how could I forget the 3 Fabulous Fox theatres in Atlanta, St Louis and Detroit (Detroit!!!) as well as the beautiful Heinz and Benedum Centres in Pittsburgh and the magnificent Shea’s in Buffalo….

The total of theaters at Playhouse Square in Cleveland is actually now five, with the addition of the restored Hanna.

Nov. 2010 article about efforts to restore the Metropolitan:

The Metropolitan Theatre is now restored and operating as the Metropolitan Entertainment Centre. The theatre is a food and beverage emporium and OPEN to the public mainly as a restaurant. Occasional screenings of old movies are played here as well as Winnipeg Jets home games. For those that can’t get hockey tickets you can watch the home game on the big screen for free! Lovingly restored by Canadinns with financial help from the City and Province, this heritage theatre had it’s rebirth as the Metropolitan Entertainment Centre November 2012 nearly 25 years from the day it last closed as a Famous Players Theatre. If you are in Winnipeg, this rare restored example of an Allan Theatre must be seen! A great place for a dinner date! Paste this link in your browser for more information:

The Wicks organ (the largest theatre installation by that firm) was removed and is now in a studio in a residence in B.C.