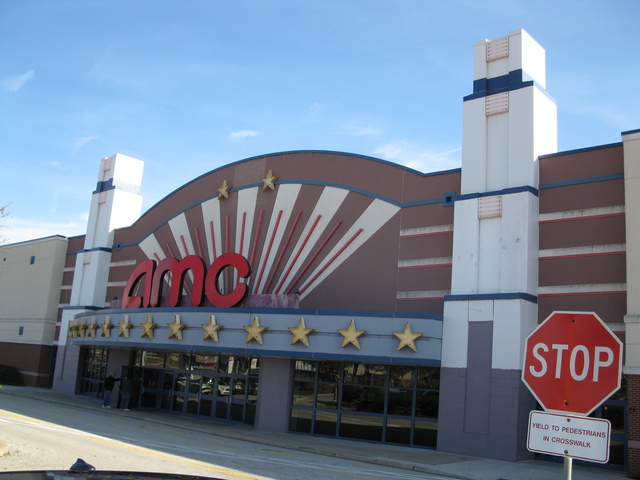 Plymouth Meeting is northwest of Philadelphia in Montgomery County. The 48,000 square foot theatre with 12 screens and 2,200 seats was opened December 18, 1998 by GCC to replace an earlier twin theater operated by the same company. The movie theater is behind the shopping mall, with a sidewalk leading to the theater. AMC took over when the company acquired GCC theaters.

Entering the theater, patrons find a huge concessions counter. Auditoriums are grouped into two sections, each on one side of the concession counter. In each section there is one auditorium with a plaque that proclaims THX certified. The THX auditoriums, # 6 and # 7 are the two largest auditoriums, which had 290 each prior to reseating with lounge chairs, and screens that are 45 wide for ‘scope films.

The June 1999 Philadelphia magazine gave a perfect 5.0 rating to what was then the GCC Plymouth Meeting 12, with the highest possible rankings in each category of Cleanliness, Service, Screen & Sound, and Seating, and in the Comment section: “Worth the $8” This was the best rating of any movie theater in the Philadelphia area other than the Ritz 12 Voorhees (which had most of its screens devoted to arthouse fare then).

The 1999 Philadelphia magazine gave the lowest rating in the Philadelphia area to the Regal Plymouth Meeting 10 rating it only a 2.8, with Comment stating “Regal Disappointment”

Also in Montgomery County, and not too far away, is the Regal Marketplace 24 @ Oaks which was rated 4.8 which was the next highest rated of all Philadelphia area theaters. Some notable theaters built since these ratings include the United Artists King of Prussia 16 and the Bridge /theaters/10911/

From the Nov 12, 2006 Philadelphia Weekly article by Andrew Repasky McElhinney,
View link
Best Overall Theatergoing Experience
From its first-rate presentation, generous-sized screens and hardworking, quick-thinking and courteous staff, the all-stadium-seating AMC Plymouth Meeting 12 is the best megaplex in the area. Clean, adjacent to the Plymouth Meeting Mall, featuring two awesomely large THX-certified screens, reasonably reliable projection and a powerful sound systemâ€"this is as good as a multiplex gets.

I haven’t put too much trust into Philadelphia magazine’s opinions of theatres since they at one time listed the lavish downtown Fox Theatre as Philadelphia’s Worst.

I’m rather selective myself and as you can tell from my “well designed” description, I agree with the magazine, and with Andrew. The screen sizes are large, sound actually is surround, and the auditoriums are comfortable.