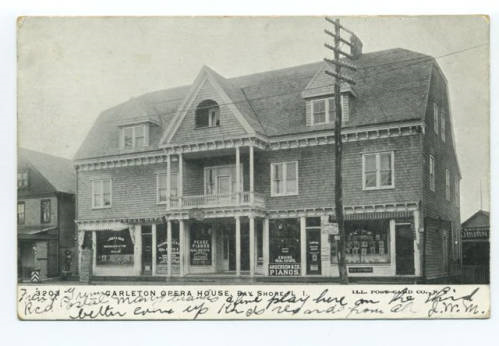 The Carleton Opera House was opened prior to 1905. By 194 it was operating as a movie theatre.

It is isted as the Carleton Theatre in the 1926 and 1927 editions of Film Daily Yearbook but was closed and demolished in 1927.

The 1926 edition of Film Daily Yearbook listing has the spelling Carleton Theatre, but I thought this was a ‘one off’ spelling mistake or typo. Obviously not!

The Carl(e)ton must have been renovated and rebuilt.

Advertisements in the Smithtown Messenger show the Carlton and the Regent operating in 1924. Movie ads were rare in the early 1920’s. Microfilm of the Messenger begins in 1922.

Maybe this is one of the theatres that were owned and operated by J.J. Fitzgibbons before he joined Paramount Publix as an executive in around 1927-1928.I know that he owned theatres in Babylon, Bayshore and maybe one or two other towns. His company was called Active Amusements Limited.

Never heard of him or it. Wonder where I can get info.

David I believe you are correct. I saw an ad for the Carlton in 1920 which, I believe, had his name. I’ll have to try and track it down and confirm. In 1929 the Bay Shore, Regent (Bay Shore), Patchogue, Rialto (also Patchogue) and Babylon were already operated by Prudential.

At one point in 1920 I found a joint ad for the Carlton and Regent under the management of Fitzgibbons. However in 1926 “Mike” Glynne obtained these and others for his circuit. Plans were to do a major rebuild of the Carlton to double it’s capacity and equip it for Broadway type productions. He also purchased land in Bay Shore for a large theatre, which I presume was the Bay Shore from the location given as to the proximity to the Catholic church.

The Carleton Opera House is listed in the 1905-1906 Cahn guide as a ground floor theater with 850 seats. Carleton was apparently the correct spelling, which is how it is spelled in an article about Carleton Brewster, the owner of the house, from the May 28, 2009, issue of the Islip Bulletin (PDF here.) Brewster built the Carleton Opera House in 1900.

A new owner planned to remodel and double the size of the house in 1926, but the Bay Shore Theatre was built nearby instead. The Carleton was razed in 1927 and a commercial building was erected on the site. That building burned in 1957. The site is now occupied by a park with a large gazebo, on the south side of Montauk Highway a few doors west of S. Park Avenue. I would surmise the theater address to have been approximately 82 W. Main Street (surprisingly, Google Street View’s address display is just about dead on at this location.)