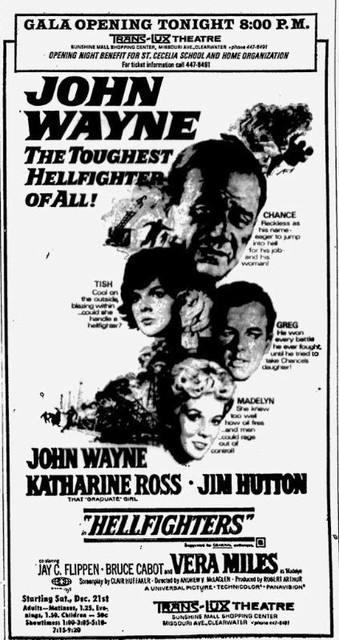 The Trans-Lux Theatre was opened in October 1968 as part of Florida’s first indoor air-conditioned indoor shopping center. 60,000 people showed up on the mall’s opening day.

The theater was bought out by Plitt Theatres in the mid-1980’s.

It offered affordable ticket prices, around $2 or $3. The owner of the mall sold the entire property to a condo developer, which demolished the Sunshine Mall in 1998.

http://news.google.com/newspapers?id=J2dQAAAAIBAJ&sjid=ulgDAAAAIBAJ&pg=4888,3008484&dq=sunshine+mall+theaters&hl=en Article on twining the theater

This capsule history of Clearwater’s Sunshine Mall at Mall Hall of Fame says that the “…single-screen, Trans-Lux Theatre showed its first feature in mid-October 1968.”

The John and Drew Eberson Archives at the Wolfsonian Institute lists the Trans-Lux Sunshine Theatre as a 1968 project by Drew Eberson. He was also the architect for the theater’s twinning, which the Mall site says took place in 1977.

The December 13, 1977 issue of the St. Petersburg Independent had an article about the reopening of the Sunshine Mall Theatre, which was to take place the following night (scan at Google News.) The article says that the architects for the twinning were Brookbank, Murphy & Shields, but they were most likely acting as supervising architects, as the Eberson Archives list Drew Eberson as architect for the remodeling as well as the original Trans-Lux Sunshine Theatre of 1968.

I worked there from about 1992 until a few months before it closed . I started as an usher and left as the projection manager"most of the time we only had two projectionist “ A woman named Brenda was the Theater manager when I left, when I first started, I think the manager name was Rick. was a great place to work and I started going there When the first star wars came out ” i’m sure it was a two plex at the time. I spent a lot of summer days there :) I remember being in middle school when they closed down to make it a 5 plex . If anyone has photos of it during the 80’s and 90’s,I would love to see them. sadly I don’t have any pictures of it :( lost all my family photos when my sister put them in storage and failed to pay :/ So post if you do, i’m following this topic

I just want to add something about the closing of it, the owner did sell it to someone but it wasn’t a condo developer, it was to the Church of Scientology. They built the Condos for their people, and years later they opened it to rent to anyone. Now its a section 8 hot bed. The place is run down and all the units have been tore up . Most pizza places won’t go there at night for fear of being robbed. I know because I was a manger for the local Pizza hut LOL . Sad, they closed the theater down when they did, It started to pick up being a dollar theater . Friday and Saturdays was always jammed packed . But the new owners for some reason felt they needed a pond there :/ they left the eye glasses place alone and built a strip mall in front of theater and where the wall was .

akow: Is the eyeglasses place you refer to the Visionworks at 912 S. Missouri, and the strip mall the building next door with an insurance office at 918 and three currently (in Google street view) vacant storefronts south of it?

Yes, I forgot the name of the eye glass place. Its been years since I was down that way. My friend’s mom worked there when I was a kid. I know that mall was dead for a long time,but it was a fun place to go for kids/teens for movies and the arcade inside the mall . Was the only place for local kids to go after the skating rink closed down late 80’s on Missouri, now its a salvation army store.