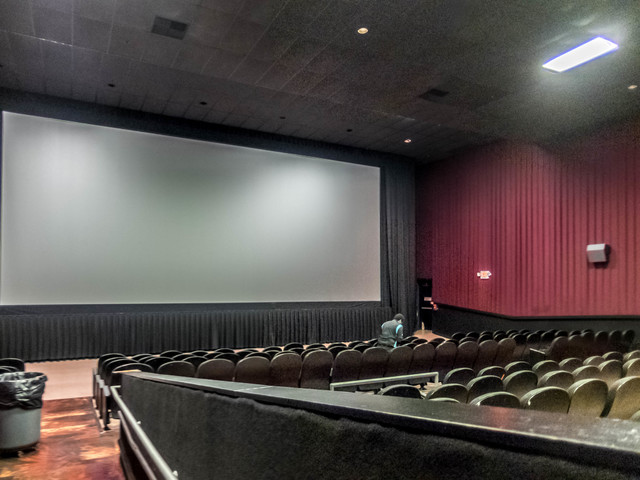 Though advertised in major newspapers movie clocks as “Center City” (downtown Philadelphia) the Riverview is in South Philadelphia in a shopping center near the Delaware River at Exit 20 off I-95. Advertisements state “Free Lighted Parking”.

The Riverview opened on November 1, 1991 with 11 auditoriums on one floor, and a total of 3,600 seats. On August 28, 1998, a second floor was added with six more auditoriums, and all of the auditoriums in the theatre were stadium seated. The stadium seating of the main floor auditoriums made some of them appear awkward in scale. Upstairs, there are some huge screens including auditorium # 2 which has 380 seats and a screen that I estimated at 50 feet wide for a ‘scope film. Upstairs auditorium # 4 has about 175 seats and a not very large screen that I estimated at 25 feet wide. All auditoriums have excellent digital surround sound. JKRoller Architects of Philadelphia, PA designed the Riverview, and the increase from 11 to 17 screens.

From its opening, the Riverview has been very popular. Its popularity contributed to the demise of downtown (Center City) Philadelphia’s mainstream moviehouses, none of which had more than four screens. The Riverview’s crowds are often noisy in the auditoriums during the movies. Many Philadelphians attend movies earlier in the day to avoid the noisy crowds, or avoid the Riverview altogether.

It was closed on March 16, 2020 due to the Covid-19 pandemic. It was announced in November 2020 that the closure would be permanent.

New Showcase Presentations in Philadelphia article includes mention of the 70mm engagements here at the Riverview Plaza (along with other Philadelphia area cinemas).

Do all 17 screens have and use masking or matting?

I’m reposting a yelp comment (5-27-18 by A and JS of San Francisco)– This review is mainly a post about the size of the various theaters. While Fandango does list auditorium numbers with showtimes, the size of the screens is rather mysterious until you are there. Auditoriums 1 – 6 are upstairs, and 1 and 2 are biggest, huge even. Downstairs are auditoriums 7 – 15. Avoid the tiny, nearly worthless 14 & 15, which are almost like big screen televisions. I thought, just by sight comparison, that 8 and 13 were maybe a little larger than the others downstairs, but this may be my imagination. Would love to see more posts/more information about this. I love a big screen, but don’t want to see, or pay for, IMAX. Anyone else have an opinion to contribute?

Howard, the only real measurement would be size of screen against size/dimensions of auditorium. The Roxy’s initial CinemaScope screen surpassed in square footage that of thw Broadway’s Cinerama in 1953.

In Brooklyn, NY United Artists converted Sheepshead Bay to Stadium seating with the exception of 2 screens. Did that happen at Riverview also.

Hiya! My name’s Jim Perry & I’m the original chief film projectionist for the Riverview multiplex (from it’s opening in Nov. 1991, to about sometime in 1994), and I’m gonna answer a question, as well as mentioning a somewhat “important” point “trivia / history-wise”.

To “ediemer” - you asked about what the theatre had in regards to 70mm. At the time, Theatres 6 (one of the mid-size houses) & 7 (The Large House) had Century 70/35 film projectors, and both had Dolby CP65 processors for the sound. (Both were originally supposed to have an early digital stereo system called Cinema Digital Sound, but the company(s) who created it cancelled “the project” about a week or 2 before the Riverview opened up. That’s a story in itself, but for another time.) Basically, in theory - say we ran something in theatre 7 and it turned out to be a stiff at the box office, we could move it (the print) to theatre 6. (Case in point - you mentioned “Gettysburg”. Turns out that one was the last 70mm feature I ever ran. It was also “a stiff”. Meaning: we played it originally in 7 & ended up moving it in 6.)

For the record - when The Riverview finally opened up in Nov. of 1991, only 9 of its 11 screens/houses were ready - theatres 8 & 9 (A.K.A. “The Dinky Houses”) were still being worked on - we didn’t open those 2 until either December or January.

Not to “kiss ass” here, but somebody mentioned Ron Angeli. I was in “the biz” for several years & in regards to all the jobs/thetres I worked at, Ron was probably the best theatre manager I ever worked for. The guy knew how to run a theatre. He was also a “NO NONSENSE/NO B.S.” kinda guy. Let me put it another way - I wasn’t there on these stories about the theatre going into “decline”, but I can guess that when that happened, Ron wasn’t there either. The last thing I heard (probably sometime in the late 90’s), United Artists Theatres apparently decided to let Ron go. (Pretty much a STOOPID move on their part.)

Is this theater complex still standing?