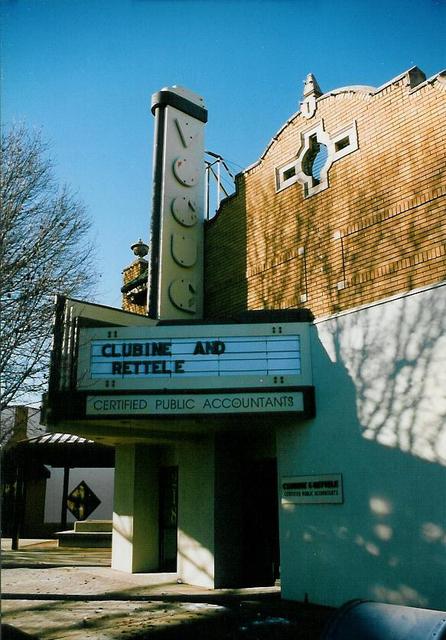 Originally built in 1928 to house the Limon-Bell Tire company which occupied the building until October 1938 when it was renovated to house the Vogue Theatre.

At its opening the Vogue Theatre presented itself as the “Modern Streamlined” theatre and provided stiff competition for the Fox Watson Theatre, located directly across the street. When the Dickinson Theatre chain did not renew the lease in 1994, the accounting firm of Clubine and Rettele, located next door north expanded into the theatre space.

All that remains of the theatre today is the original streamlined Art Moderne marquee.

The Vogue – taken over by accountants! A shot taken in December 1996:
View link

Boxoffice of October 15, 1938, reported that the Vogue Theatre at Salina had opened the previous Thursday. The magazine’s October 22 issue reported some details of the event, and revealed that architect Larry P. Larson had designed the Vogue.

The Vogue’s original owner, Gus Diamond, sold the house to Lon Cox in 1949. Boxoffice of July 23 said that Cox would take over operation of the Vouge and of the Howard Theatre at Arkansas City, which he had also bought from Diamond, on August 1. Diamond would move to Los Angeles where he would devote his time to his interests in the Pacific Drive-In Theatres circuit.

Cox operated the Vogue until 1962 when he sold the house to the Dickinson circuit, reported in Boxoffice of June 25. The house operated at least into the mid-1970s, and was mentioned several times by Boxoffice in 1975.

From 2010 a photo of the Vogue Theatre building in Salina.

The seats that are in the mezzanine section of Wichita’s Orpheum Theatre came from Salina’s Vogue Theatre.

Listings stopped in 1994 for this cinema in the newspaper.