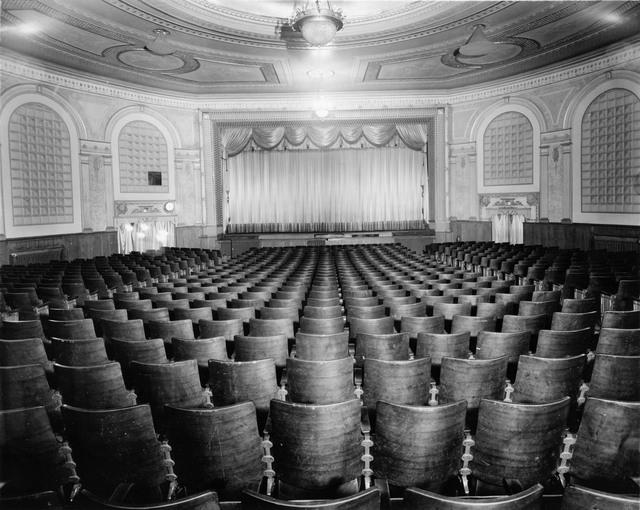 In 1970 Global Pictures took over operation of the the theater until it closed in 1980. The Delta has been converted into an apartment building.

Yes. There was a balcony beside the Union Projection Room but in the 1970-80’s it was closed to the public – no seats. I remember seeing many big screen classics before VHS. I’ll post some pictures soon from Ontario Archives.

Excellent! Thanks very much for this… Do you also have pictures of other Hamilton theatres? Been looking for pics of the Galt Capitol too.I would be most grateful to see some pictures of the Delta Theatre’s interior.

The listing from Ontario Archives says the pictures are from the 1940’s, and I haven’t seen them myself. I am going to make the pilgrimage to the archives myself very soon.

BTW I have a theatrical connection to the old Delta, in a rather oblique way. I wrote a stage adaptation of a book called MY FATHER’S HOUSE by Sylvia Fraser. One of the scenes in the play takes place in the auditorium of the old Delta… We have staged it four times now, and each time I have taken the actors to the outside of the apartments and showed them where the marquee once was, and the location of the former Main Street fire exit, now bricked up.

Pizza Pizza operates a phone centre out of what used to be the lobby.

First of all, mortonbg’s 2009 comment is incorrect. Pizza Pizza is in the building at the extreme eastern end of the delta (formerly a drug store). The Delta Theatre building is separate from the Pizza Pizza store—the former bank building separates the two. The Delta lobby is a store, with entrances on either side. It is currently for lease. You can see on the Google street view where the former theater entrance was and where Pizza Pizza still is. Phoenix no longer has a connection with the apartments and the sign has been removed.
If you look to the ground, at the converted store doorway, you can see part of the original tiled floor of the theater entrance. The same can be seen on the opposite side of the delta (the theater had two entrances and the converted store front has the same).

For a picture of the Delta Theatre, as a theatre, see John Sebert’s “Glamorous Ghosts” at: www.hamiltonmagazine.com/sitepages/?aid. I attended a number of movies there when it was the 99-cent Delta. You could smoke in theaters in those days. The air would be thick with smoke (and I don’t mean regular tobacco). The Delta was a beautiful theater, and must have been amazing in its ‘hey day’. It was elegant and ornate and had a domed ceiling. I remember clouds and angels…and two marquees!

A change to my May 2012 comment and an apology to “mortonbg”: Pizza Pizza DID operate a phone centre in the former lobby space. I was mis-informed. I talked to a landlord, or agent, and she confirmed that the call centre formerly occupied the space which is currently empty and for rent. She mentioned that they are trying to keep as much of the original facade restored and exposed, as possible (including the tiled entrances).

The above photo shows the south entrance on Main Street. The sign board, under the marquee, says: T HOWARD IN GREEN FOR DANGER ALSO HEARTBEAT WITH GINGER ROGERS. T is for Trevor and both films were released in 1946.

The Spectator from Saturday, December 2, 1972 has an ad for the GALAXY. It is stated in the ad: (Formerly The Delta) King St. At the Delta 545-1116 Notice—Inside renovations completed. Advertised is a double feature of “High Wild and Free” and “The Savage Wild”.

Fred Guest was making plans to build the Delta Theatre as early as 1922, when this item appeared in the November 4 issue of Motion Picture News:

“To Build Theatre in Ont.

“Fred Guest, one of the pioneer moving picture theatre proprietors of Hamilton, Ontario has completed arrangements for the erection of a large moving picture theatre and apartment block in Hamilton to cost upwards of $500,000. The project involves the construction of a theatre having two entrances, one on King Street and the other on Main Street, with individual facilities for fourteen stores and a number of apartment suites.”Records of the Prack family of architects, who had offices in Pittsburgh, Pennsylvania, and Toronto and Hamilton, Ontario, list the Delta Theatre as a 1922 project for Fred Guest, designed by architect Bernard Herman Prack. Although designed in late 1922, the Delta apparently did not open until sometime in 1925, as the first year I see it listed in the Hamilton City Directory is 1926.

Joe, I know that the Delta Theatre was planned as far back as 1921, but did not actually attract investors with the necessary funding until 1924.

The original corner building went up in 1919, but it was only one story, I have seen pictures of it before the Main Street auditorium, and the entrences on King and Main were added.

It original building was enlarged, and at second story added, when the theatre began construction circa 1924.

Fred Guest, as he already owned several cinemas in Hamilton, was the key player who made the project feasible. He certainly made money enough to reinvest in new theatre construction.