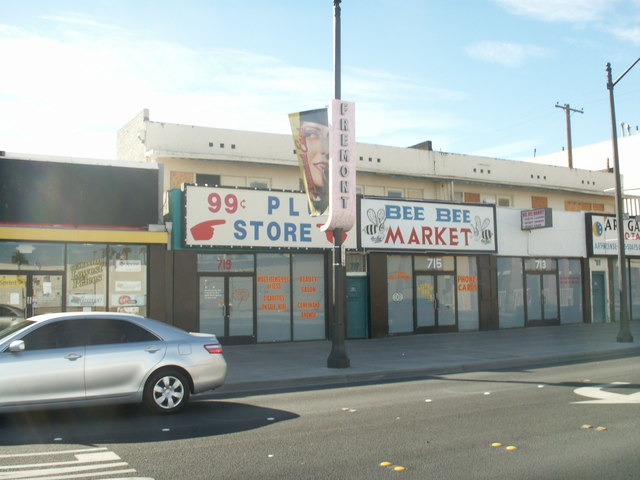 Located near downtown Las Vegas. Opened in November 1969 screening independent movies. From 1970 the Flick Theatre ran pornographic fare. It was twinned in early-1976. By August of 1980, when I visited the theatre, the twin was running a double feature of "Deep Throat" & "Devil in Miss Jones" on one screen and "Debbie Does Dallas" & "Behind the Green Door" on the other.

I have no other history on the Flick Theatre. A search of its address (which I gleaned from the CinemaTour site) showed City Center Laundromat occupying the building in the mid-2000’s. It became a 99cent store. When viewed in January 2009, the building was standing empty and unused. It had been demolished by June 2017.

Yep! I remember this place. It did have a big auditorium. I went there with my girlfriend in 1987 and saw a double bill of some movie I don’t remember that we walked in the middle of and “Hot Pursuit”. The second had an elaborate plot with a private eye trying to chase down a porn movie made by a now superstar status pop singer who’s terrified that if the movie surfaces it’ll ruin her career. I definitely remember it being on 35mm and everything as it was a huge screen. Popcorn was available in the snack bark (Yccch!) and yes… during the movie, my girlfriend and I had to relocate once ‘cos some guy parked in the row behind us started hooking his horse.

The battle between the awesomeness of seeing regular movies in the theater and the convenience of renting them on NetFlix or downloading at home rages on but I think it’s safe to say catching an X-rated movie on the big screen is pretty obsolete. Except that… believe it or not in my new home town of Portland, OR there are not one but TWO adult movie theaters. One of which has been in continuous operation since 1970!

Two theaters and a book store, Apartment up stairs, which later after the theater closed became and cheap flop rental for a time

Opened with “An evening with the Underground” with offbeat films. Adult programming started in 1970. Grand opening ad posted.